I chose the audiobook of this week’s New Title Tuesday pick Tornado Weather by Deborah E. Kennedy and was impressed with the subtle power of this debut novel.

Publisher’s Summary:   Five-year-old Daisy Gonzalez’s father is always waiting for her at the bus stop. But today, he isn’t, and Daisy disappears.

When Daisy goes missing, nearly everyone in town suspects or knows something different about what happened. And they also know a lot about each other. The immigrants who work in the dairy farm know their employers’ secrets. The hairdresser knows everything except what’s happening in her own backyard. And the roadkill collector knows love and heartbreak more than anyone would ever expect. They are all connected, in ways small and profound, open and secret.

By turns unsettling, dark, and wry, Kennedy’s powerful voice brings the town’s rich fabric to life. Tornado Weather is an affecting portrait of a complex and flawed cast of characters striving to find fulfillment in their lives – and Kennedy brilliantly shows that there is nothing average about an average life.

Although the novel begins with the sudden disappearance of a child, this is not a mystery or a study of parental devastation – even though those things happen. Tornado Weather is a story of a race, class, ignorance, and small town on the brink.

In this, as in many towns, everyone might know everybody’s name but not their  emotional prison. Kennedy carefully delineates the characters by giving them each a singular voice as the narrator of their own chapters.

“Though the book shows us trapped people in a declining town, there is nothing at all claustrophobic about a narrative that shifts its lenses continually and deliberately, playing with degrees of identification as it slides among more than a dozen viewpoints. When two enemies meet accidentally near the end, we see them mourning private griefs, and, having experienced so much, they part at last without rancor: “They knew too much now, of men and women and the world, to hate each other any longer.” By the end of this well-crafted, humane and energetic novel, readers know too much of Kennedy’s characters not to sympathize.”

With all the humanity and humor in Tornado Weather  you will surely enjoy getting to know these flawed and injured characters. 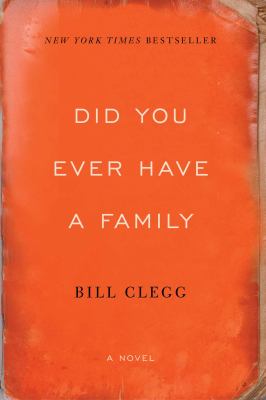 Did You Ever Have A Family? By Bill Clegg – On the eve of her daughter’s wedding, June Reid’s life is completely devastated when a shocking disaster takes the lives of her daughter, her daughter’s fiancé, her ex-husband, and her boyfriend, Luke–her entire family, all gone in a moment. And June is the only survivor. Alone and directionless, June drives across the country, away from her small Connecticut town. In her wake, a community emerges, weaving a beautiful and surprising web of connections through shared heartbreak. From the couple running a motel on the Pacific Ocean where June eventually settles into a quiet half-life, to the wedding’s caterer whose bill has been forgotten, to Luke’s mother, the shattered outcast of the town–everyone touched by the tragedy is changed as truths about their near and far histories finally come to light.

Every Kind of Wanting by Gina Frangello – Miguel could not be more different from his partner Chad, a happy-go-lucky real estate mogul from Chicago’s wealthy North Shore. When Chad’s sister, Gretchen offers the couple an egg, their search for a surrogate leads them to Miguel’s old friend Emily, happily married to an eccentric Irish playwright, Nick, with whom she is raising two boys. Into this web falls Miguel’s sister Lina, a former addict and stripper, who begins a passionate affair with Nick while deciphering the mysteries of her past. But every action these couples make has unforeseen consequences.