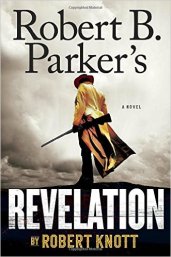 I resolved this year to read books outside of my usual go-to list, so this week’s New Title Tuesday recommendation is Robert B. Parker’s Revelation, by Robert Knott.

Shoot-em-up Westerns were standard TV and movie fare in the 50’s and 60’s, and there is something to be said about the moral hero enforcing justice in the lawless west.  Maybe that right-or-wrong, good-vs-evil narrative resonates because there is lawlessness still in  – the Internet and of course in some communities and countries.

In the typical American or ‘spaghetti’ western,’ the good guy always wins and doesn’t brag about it.  I say, bring on the righteous, selfless US Marshals!

Territorial marshals Virgil Cole and Everett Hitch figured things had finally settled down in Appaloosa when Boston Bill Black’s murder charge was dropped. But all that changed when Augustus Noble Driggs was transferred to a stateside penitentiary just across the border from Mexico. Square-jawed, handsome, and built like a muscled thoroughbred stallion, Driggs manages to intimidate everyone inside the prison walls, including the upstart young warden.

In a haunting twist of fate, Driggs and a pack of cold-blooded convicts are suddenly on the loose—and it’s up to any and all territorial lawmen, including Cole and Hitch, to capture the fugitives and rescue the woman kidnapped during their escape. But nothing is ever quite what it seems with the ever-elusive Driggs. Finally free, he’s quickly on his own furious hunt for a hidden cache of gold and jewels—and for the men who betrayed him and left him for dead.

With an unlikely and unconventional Yankee detective by their side, Cole and Hitch set off on a massive manhunt. As horses’ hooves thunder and guns echo deadening reports, Driggs discovers one of the lawmen on his trail is none other than a fellow West Point graduate he’d just as soon see dead. Ruthless and willing to leave a bloody path of destruction in his wake, Driggs seeks vengeance at any cost.

The dialogue in Revelation is believable and abbreviated as it is in Clint Eastwood’s Westerns – at times, briefer than a Tweet.

Best-selling author, Robert B. Parker died in 2010, is known for his detective series featuring Spenser, Jesse Stone or Sunny Randall, and the Virgil Cole–Everett Hitch western series.  Robert Knott is no stranger to Parker’s work, having penned several titles in late writer’s series including Robert B. Parker’s Blackjack, The Bridge, and Bull River.  Knott and actor Ed Harris adapted and produced the film Appaloosa based on Parker’s novel.

In all, Revelation is a quick paced, get-away-from-it-all read with men of few words but lots of character.

Also by Robert B. Parker:

Split Image – The body in the trunk was just the beginning. Turns out the stiff was a foot soldier for local tough guy Reggie Galen, now enjoying a comfortable “retirement” with his beautiful wife, Rebecca, in the nicest part of Paradise. Living next door are Knocko Moynihan and his wife, Robbie, who also happens to be Rebecca’s twin. But what initially appears to be a low-level mob hit takes on new meaning when a high-ranking crime figure is found dead on Paradise Beach. Stressed by the case, his failed relationship with his ex-wife, and his ongoing battle with the bottle, Jesse needs something to keep him from spinning out of control. When private investigator Sunny Randall comes into town on a case, she asks for Jesse’s help. As their professional and personal relationships become intertwined, both Jesse and Sunny realize that they have much in common with both their victims and their suspects-and with each other.

Stone Cold – Investigating a thrill-seeking pair of serial killers who are targeting the residents of an affluent suburban town, police chief Jesse Stone finds his job complicated by local politicians, the media, his drinking problem, and his ex-wife.

osa – DVD 1880s, the American West, Randall Bragg is a rich landowner who is wanted for murdering the town marshal. Lawman Virgil Cole and his deputy Everett Hitch are two friends who are hired to defend a lawless town from the murderous rancher. Their efforts become complicated and their friendship is tested when a young widow arrives in town.