The New Title Tuesday recommendation is Vinegar Girl by Anne Tyler.  It is a retelling of Shakespeare’s The Taming of the Shrew eliminating the overt sexism that always marred my appreciation of The Bard’s famous comedy. 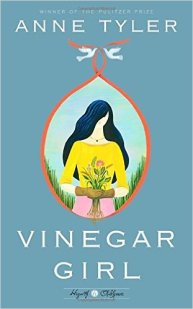 Kate Battista feels stuck. How did she end up running house and home for her eccentric scientist father and uppity, pretty younger sister Bunny? Plus, she’s always in trouble at work – her pre-school charges adore her, but their parents don’t always appreciate her unusual opinions and forthright manner. Dr. Battista has other problems. After years out in the academic wilderness, he is on the verge of a breakthrough. His research could help millions. There’s only one problem: his brilliant young lab assistant, Pyotr, is about to be deported. When Dr. Battista cooks up an outrageous plan that will enable Pyotr to stay in the country, he’s relying – as usual – on Kate to help him. Kate is furious: this time he’s really asking too much. But will she be able to resist the two men’s touchingly ludicrous campaign to bring her around?

If I hadn’t already been a fan of Tyler’s previous novels, I might have passed over Vinegar Girl.  But right away, we learn that Tyler’s Kate is not a scold, but merely blunt and lacking a gift of polite (read: meaningless) small talk.  This personality quirk provides a terrific source of humor in Kate’s job as an assistant at the manners-driven Little People’s School.  She was hired for this most ill-fitting position because of her aunt’s position on the board.

“If a child refused to lie down at Quiet Rest Time, Kate just said, ‘Fine, be that way,’ and stomped off in a huff.  Mrs. Chauncey would send her a reproachful look before telling the child, ‘Somebody isn’t doing what Miss Kate told him to.’  At such moments, Kate felt like an imposter.  Who was she to order a child to take a nap?  She completely lacked authority, and all the children knew it; they seemed to view her as just an extra-tall, more obstreperous four-year-old.  Not once during her six years at the school had the students themselves addressed her as ‘Miss Kate.’”

It is the equal parts self-deprecation and impatience with silliness that makes Tyler’s Kate fun.  As novelist Jane Smiley wrote in her New York Times review,   “Tyler’s signature skill as a novelist is portraying her characters and her setting with such precise and amusing detail (“Uncle Theron’s church was called the Cockeysville Consolidated Chapel”) that pretty soon the reader is drawn in, willy-nilly. We know where this is heading, yet she does a great job putting up the roadblocks and incorporating the surprising curves.”

Tyler took on the challenge to re-tell The Taming of the Shrew as part of the Hogarth Shakespeare project that includes The Winter’s Tale rewritten by Jeanette Winterson and Howard Jacobson’s version of The Merchant of Venice.  In his review for NPR, Heller McAlpin said that “Vinegar Girl is a fizzy cocktail of a romantic comedy, far more sweet than acidic, about finding a mate who appreciates you for your idiosyncratic, principled self — no taming necessary.”

During cold, dark winter, we can appreciate the light humor provides.

A Spool of Blue Thread: Th 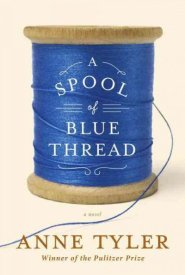 e Whitshanks are one of those families that radiate togetherness: an indefinable, enviable kind of specialness. But they are also like all families, in that the stories they tell themselves reveal only part of the picture. Abby and Red and their four grown children have accumulated not only tender moments, laughter, and celebrations, but also jealousies, disappointments, and carefully guarded secrets. From Red’s father and mother, newly arrived in Baltimore in the 1920s, to Abby and Red’s grandchildren carrying the family legacy boisterously into the twenty-first century, here are four generations of Whitshanks, their lives unfolding in and around the sprawling, lovingly worn Baltimore house that has always been their anchor.

The Beginner’s Goodbye Crippled in his right arm and leg, Aaron has spent his childhood fending off a sister who wants to manage him. So when he meets Dorothy, a plain, outspoken, independent young woman, she is like a breath of fresh air. Unhesitatingly, he marries her, and they have a relatively happy, unremarkable marriage. But when a tree crashes into their house and Dorothy is killed, Aaron feels as though he has been erased forever. Only Dorothy’s unexpected appearances from the dead help him to live in the moment and to find some peace. Gradually he discovers, as he works in the family’s vanity publishing business, turning out titles that presume to guide beginners through the trials of life, that maybe for this beginner there is a way of saying goodbye.

We have many more electronic versions of Tyler’s books, one example is: 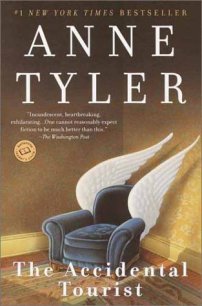 The Accidental Tourist Macon Leary hates to travel. He is someone who travels through life accidentally. Things just happen to him–the senseless death of his child, the baffling desertion of his wife, even his involvement with Muriel, the frizzy-haired, stiletto-heeled, non-stop talker from the kennel where he boards his dog.