Stranger Things, anyone? A Reader’s Advisory

I’m sure you’ve heard of this Netflix Original Series if you’ve spent anytime on the internet lately.  You, or someone you know, has probably binge-watched the entire first season over a recent weekend.  The show has so much going for it!  Not only is it a coming-of-age tale, but it is set in the perfectly nostalgic 1980’s.  It has a fantasy/horror element, as well as a cameo appearance by, and frequent references to, Dungeons & Dragons.

If you are one of the few poor souls who HASN’T enjoyed Stranger Things yet, stop reading, and get to it.  If you don’t have a Netflix account, you can checkout a Roku from the library (Netflix comes preloaded).  I should mention there is a wait list, but at least you can get in line.

If you are one of the poor souls who HAS enjoyed this series, then you are left with a gaping hole in your life.  There will be a season 2 of the show, but the waiting and uncertainty around a release date may be too much to handle.  If that is the case, never fear, we have your back.

Below you find a list of books that will scratch that Stranger Things itch.  Props to Kimberly Burton over at NoveList for putting this list together.  Click on the cover image for a book to see it in our catalog.  If we don’t have it available locally, we can definitely request it from another library.  Some of the titles may be available as ebooks as well.

Without any further ado…

The Girl with All the Gifts  by M. R. Carey
If Eleven (“Elle”) is your favorite Stranger Things character, then this is the book for you! Melanie can’t remember life before the base. Sheltered there from zombie-like “hungries” that have ravaged England for decades, Melanie spends her days confined in a cell. She is collected to go to the shower, and to class every day — with Sergeant Parks training his gun on her, as two of his people strap her into a wheelchair for transport. She thinks they don’t like her. She just wants to be a normal girl. Then the base is attacked, and Melanie escapes. On the outside with her favorite teacher Miss Justineau, the Sergeant, and Dr. Caldwell (a scientist who experimented on Melanie at the base), Melanie is about to show everyone just how gifted she really is.

Neverland  by Douglas Clegg
Beau and his family spend summers at his grandmother’s rambling Victorian home on Gull Island. It isn’t as idyllic as it sounds: his grandmother is a blatant racist and the other adults usually drink too much and argue. This year Beau’s older cousin Sumter decides to show him the secrets of “Neverland,” a tumble-down shack at the far edge of the island. In it, a crate houses someone (or something) calling itself “Lucy.” Soon their secret rituals escalate into sinister games, and Neverland becomes the stuff of nightmares as well as dreams. Mesmerizing and terrifying at once, Neverland brilliantly captures the conflicted desires of a child on the cusp of growing up.

Ready Player One by Ernest Cline
Part quest, part coming-of-age novel, and part love story, this spectacular genre blend is a must-read for fans of the show Stranger Things and 80’s pop-culture buffs. In a grim, dystopian near-future world, high schooler Wade Watts spends his days jacked into the OASIS, a sprawling virtual utopia that lets you be anything you want to be, on any of ten thousand planets. Like most of humanity, he dreams of solving the OASIS creator’s ultimate, final puzzle: a mystery hidden in OASIS, concealed with clever puzzles requiring prodigious retro-pop-culture knowledge to solve. Despite the substitution of high-tech thrills for Stranger Things‘ suburban horror/fantasy elements, you’ll be just as charmed by the adventures of this book’s resourceful, diverse, and determined young protagonists.

The Boy Who Drew Monsters by Keith Donohue
Emotionally scarred by a near-drowning experience, young Jack Keenan spends all his time indoors, fanatically preoccupied with drawing strange things. He shares his drawings with his best friend Nick, and sometimes they draw together. That is, until Nick notices that disturbing events take place when they do — and Jack’s parents have started hearing and seeing things that look a lot like the monsters they draw. The Boy Who Drew Monsters offers a compelling coming-of-age tale with a straight-up horror twist. Like Stranger Things, it illuminates the complexities of boyhood friendships as well as adult relationships.

My Best Friend’s Exorcism by Grady Hendrix
As girls, Abby and Gretchen bond over their shared love of E.T., roller-skating parties, and scratch-and-sniff stickers. Still best friends in high-school, they enjoy small-town pleasures like sneaking out at night to drink, listen to music, and skinny-dip. One night’s lame experimentation with LSD changes Gretchen: she becomes weird and withdrawn at first; she finally snaps out of it, but begins ruthlessly and cruelly manipulating their circle of friends. Only Abby grasps the truth: Gretchen is possessed by a demon. With help from unlikely allies, Abby battles the devil for her friend’s soul. Darker than the film Heathers — but no less a testament to the power of friendship than Stranger Things — My Best Friend’s Exorcism dishes up 80’s nostalgia with supernatural creepiness to spare.

It by Stephen King
Stranger Things pays homage to Stephen King’s 1980’s horror heyday in various ways, notably the distinctive lettering that announces each episode’s title in the opening credits — a nod to the original 1986 It cover. Stephen King’s It introduced readers to the world’s creepiest clown: Pennywise, in reality just one form of a horrific eldritch entity (“It”) that returns every 27 years to feed on the children of Derry, Maine. During the 1950s, nerdy teens (whose main hobby is running away from bullies) stumble upon the town’s secret evil. They banish It, but must reunite in the mid-1980s to kill It once and for all.  Much darker than Stranger Things, this modern horror gem is well worth a read (or re-read) for any fan of the show.

Disappearance at Devil’s Rock by Paul Tremblay
13-year-old Tommy sneaks out with friends one night, to visit a site that local legends claim is cursed. Tommy disappears. His grief-stricken mother Elizabeth can barely hold it together: the other boys aren’t quite telling all they know, and police lose interest as the trail goes cold. Elizabeth becomes convinced that Tommy is dead — and his spirit appears as a dark shape in her bedroom at night. Everyone calls her crazy — until others around town start seeing dark shapes at night, too. Like Stranger Things‘ character Joyce Byers, Elizabeth is a believably flawed but sympathetic single mom willing to face unholy powers to learn her missing son’s fate. 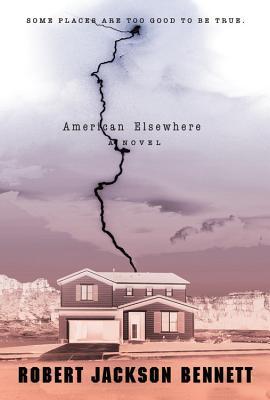 American Elsewhere by Robert Jackson Bennett
Wink, New Mexico, lies under a perfect pink moon, a perfect little town not found on any map. Its perfect, pretty houses conceal the strangest things — as ex-cop Mona Bright discovers, when she inherits a home in Wink from her long-dead mother. Settling uncomfortably among its quixotic, secretive residents, Mona pieces together bits of her childhood memories: how Wink was a “government town” built to service a mysterious research station on the nearby mesa. Mona knows her mother worked there — and that experiments in quantum physics were performed at the facility until abruptly closed in the 1970s. Could a lab like this produce a prodigy like Stranger Things’ Eleven? Or perhaps a terrifying realm like “the Upside Down” itself? This cool, claustrophobic horror story will make fans wonder.

Happy reading.  You should be all geared up for Halloween now   🙂