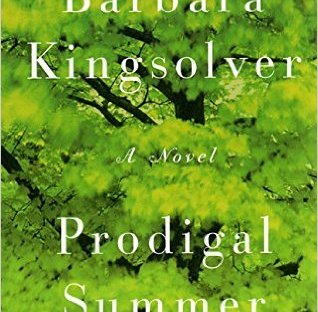 As the summer comes to an end, my Five Star pick this week is Prodigal Summer by Barbara Kingsolver, a novel that is “all about sex,“ as Jennifer Schuessler described in her New York
Times review:

But don’t jump to conclusions.  Prodigal Summer, as Kingsolver explains, is about the “biological cycles and rhythms of life,” including seasons, coyotes, sheep, chestnut trees, moths, or humans.   Kingsolver defines “prodigal” as: “Recklessly productive, wastefully extravagant, lavish, prolific…. the perfect word for describing nature in high season, when a maple tree is whirling thousands of seeds into the air.”

Prodigal Summer weaves together three stories of human love within a larger tapestry of lives inhabiting the forested mountains and struggling small farms of southern Appalachia. At the heart of these intertwined narratives is a den of coyotes that have recently migrated into the region. Deanna Wolfe, a reclusive wildlife biologist, watches the forest from her outpost in an isolated mountain cabin where she is caught off-guard by Eddie Bondo, a young hunter who comes to invade her most private spaces and confound her self-assured, solitary life. On a farm several miles down the mountain, another web of lives unfolds as Lusa Maluf Landowski, a bookish city girl turned farmer’s wife, finds herself unexpectedly marooned in a strange place where she must declare or lose her attachment to the land. And a few more miles down the road, a pair of elderly, feuding neighbors tend their respective farms and wrangle about God, pesticides, and the complexities of a world neither of them expected.

What draws me to Kingsolver’s work is how she lovingly creates complex and relatable characters who find themselves in uncommon, yet realistic circumstances.  Moreover, Kingsolver’s narrative illustrates how everything is connected from plants to humans.

It should be noted that Kingsolver formally studied biology; however, her prose is anything but ‘textbook.’  Perhaps it was only my experience, but the high school and college science classes made the life cycle of any living creature – especially humans – clinical and boring.  But Kingsolver translates academic and scientific jargon into accessible language and imagery that builds understanding as well as drama.  As a life-long city dweller, I recognize that when distanced from the cycles and rhythms of nature it is easy to disregard the beauty and vulnerability of our ecology.

First and foremost, Prodigal Summer is a joyous and touching book that celebrates love in all of its expressions without sentimentality.  And as Kingsolver said about her book that has Mother Nature as a central character:   “I had at least one strike in my favor, from the start:  a biological novel will have to be full of sex.”

Other books by Kingsolver include Flight Behavior, another novel set in Appalachia, or her memoir, Animal, Vegetable, Miracle: A Year of Food Life, about the year Kingsolver and her family spent consuming only locally produced food.

But she may be best known for The Poisonwood Bible, a story told by the wife and four daughters of Nathan Price, a fierce evangelical Baptist who takes his family and mission to the Belgian Congo in 1959. 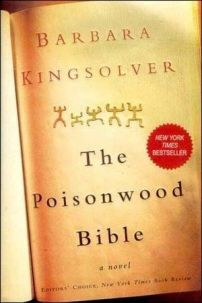