Each month we invite patrons to Meet the Staff. This month we introduce Annie in Circulation who has been with us since spring, 2018.  Easy going and with a wide range of interests, Annie is always happy to help patrons.  Next time you come in, ask her to tell you about her wide variety of pets!

Though I have only been working at the O’Fallon Public Library for around eight months, it has to be one of my favorite jobs I’ve had yet.  I started around the end of April in the circulation department, and since then I’ve read more books than I probably have in the past few years. One of the reasons I applied for the position is because I decided I needed to read more and what better way to start than to surround yourself by books and book-lovers with great suggestions?

Even though my favorite genre is horror/suspense,

some of my favorite books don’t come anywhere near that description.  They include The Art of Racing in the Rain by Garth Stein, The Lovely Bones by Alice Sebold, and House of the Scorpion by Nancy Farmer.  Those are just a couple of the books that I am able to read again and again and still enjoy them as much as the first time I read them. Going from favorite books to TV shows, I am one of those people that can hear a quote from The Office and know exactly what episode it’s from and the context of the quote (should I be proud of this? Probably not).  My other favorite shows include Malcolm in the Middle (along with Breaking Bad, Bryan Cranston is one of my favorite actors), It’s Always Sunny in Philadelphia, Atlanta, Broad City, and American Horror Story to name a few.  When it comes to music, I gravitate towards the grungy 90’s rock or to quiet acoustic.

Something that sets me apart from my coworkers is my hobbies, which could only be described as unique or unconventional (or strange if we’re being blunt). After earning a Bachelor’s degree in Zoology at Southern Illinois University Carbondale, I have found a passion for collecting and raising animals, particularly of the hairy 8-legged variety.  Along with varying snakes and geckos, I share my home with 21 (and counting) tarantulas of varying temperaments. For anyone keeping track, that’s 168 furry legs! Their personalities range from slow moving and tolerant to make-a-grown-man-scream-like-a-little-girl-with-one-lightning-fast-movement. It fascinates and captivates me to no end to watch them all eat, spin their webs, groom themselves, and grow. They present me with new challenges and projects, plus the occasional adrenaline rush. Working at the library has presented me with plenty of opportunities to further research these misunderstood creatures so that I may care for them to the best of my ability and maybe even contribute to conservation efforts one day.

Along with the scary pets, I do have two of the best dogs in the world.  Ruger is a 3-year-old pit bull-Labrador mix, and is one of the sweetest boys I’ve ever met!  He thinks he’s a forever puppy, despite being close to 90 pounds, and his kisses literally never stop.  My other pup is Adeline, or Addie, and she is a 2-year-old pit bull with the best floppy ears I have ever seen.  Addie lets her tomboy sideshow in that she enjoys roughhousing more than her brother Ruger, yet like any lady, she always gets in the last word and does not hold her attitude back. Despite being sassy and opinionated, Addie is my baby and most of the time you can find us cuddled up under a blanket.

All in all, I promise I’m not as scary as my spiders! Don’t hesitate to ask me anything, especially if its animal related!

Check out Some of Annie’s Favorite Titles: 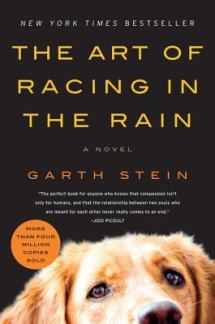 The Art of Racing in the Rain by Garth Stein – Enzo, a dog with a philosopher’s soul, has educated himself by watching television extensively, and by listening very closely to the words of his master, Denny Swift, an up-and-coming race car driver. Nearing the end of his life, Enzo recalls all that he and his family have been through: the sacrifices Denny has made to succeed professionally; the unexpected loss of Eve, Denny’s wife; the three-year battle over their daughter, Zoë, whose maternal grandparents pulled every string to gain custody. In the end, despite what he sees as his own limitations, Enzo comes through heroically to preserve the Swift family, holding in his heart the dream that Denny will become a racing champion with Zoë at his side. Having learned what it takes to be a compassionate and successful person, the wise canine can barely wait until his next lifetime, when he is sure he will return as a man.

The Lovely Bones by Alice Sebold Through the voice of a precocious teenage girl, 14-year-old Susie Salmon relates the awful events of her death and builds out of her family’s grief a hopeful and joyful story. 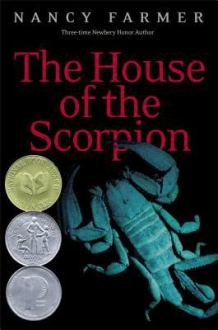 House of the Scorpion by Nancy Farmer – In a future where humans despise clones, Matt enjoys special status as the young clone of El Patrón, the 142-year-old leader of a corrupt drug empire nestled between Mexico and the United States.