This Could Hurt by Jillian Medoff – New Title Tuesday

This Could Hurt by Jillian Medoff, this week’s New Title Tuesday, could seem like a risky topic.  Set during the economic and employment aftermath of the 2008 financial meltdown, there’s a chance it could trigger that familiar pit-of-the-stomach-loss that infected businesses and households across the country.  But in Medoff’s hands, the harsh reality is tempered by the humor, distrust, and interdependence that inevitably occurs between people who share the same work-space and experience the same events. 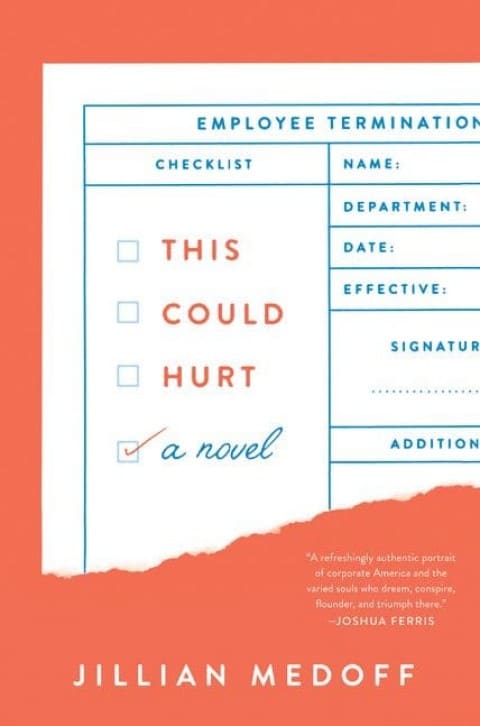 Publisher’s Summary: Against all odds, Rosa Guerrero became a high-ranking executive. By wielding power with grace and compassion, the longtime chief of Human Resources at Ellery Consumer Research has earned the devotion and loyalty of her senior staff. With the economy in the tank and unemployment on the rise, Ellery’s future looks grim. While Rosa fights to insulate her people from the harsh realities of business, they’re facing crises of their own; Leo Smalls has no life outside of Ellery (or Rosa), Rob Hirsch’s existential dread pushes him closer to his “work wife,” and Lucy Bender, a brainy, ambitious VP is desperate to find meaning in her life. For Kenny Verville, a Wharton MBA, Ellery is merely a stepping-stone to better things. Day after day, these heartbreakingly flawed coworkers scheme and dream, fall in and out of love, and chase ideas big and small. But when Rosa, their guiding light, begins to unravel, Leo, Rob, Lucy, and Kenny find themselves challenged in ways beyond their reckoning.

The characters in This Could Hurt display the same good and bad traits we all possess – they understand that their jobs are never really secure because of the layoffs and regular reduction in force.  They humanly place that idea safely behind a delusional Chinese Wall, so they can summon the courage and will to continue showing up. To supply the level of energy needed to shore up that self-deception, they tend to indulge in any number of less than heroic behaviors.  For example:

Fortunately,  This Could Hurt is a perfect balance of tragedy and comedy that is more uplifting than seems possible within the bleak walls of a business or economy in decline.

Heller McAlpin summed it up perfectly in his NPR review:  “Ultimately, Medoff’s book is about finding oneself — and satisfaction — in a combination of absorbing work and personal relationships. In addition to kindness, Rosa ingrains this idea in her acolytes: ‘The key is to be the same person at home and at work.’”

I Couldn’t Love You More – Eliot Gordon would do anything for her family. A 38-year-old working mother, she lives an ordinary but fulfilling life in suburban Atlanta with her partner, Grant Delaney, and their three daughters. The two older girls are actually Eliot’s stepdaughters, a distinction she is reluctant to make as she valiantly attempts to maintain a safe, happy household . . .Then Finn Montgomery, Eliot’s long-lost first love, appears, triggering a shocking chain of events that culminates in a split-second decision that will haunt her beloved family forever. How Eliot survives-and what she loses in the process-is a story that will resonate with anyone who has ever loved a child.

Good Girls Gone Bad –  Janey Febre is obsessed with her old boyfriend and decides to get some help, but when her new friends from the support group suggest a plot to get back at her ex, she finds herself neck deep in trouble. By the author of Hunger Point. Reader’s Guide available. Reprint. 35,000 first printing.

Hunger Point – A novel on society’s obsession with food and the body beautiful, told by Fran, the daughter of well-off parents on Long Island. The father is into gourmet cooking, the mother diets and the sister suffers from anorexia, which eventually leads to her suicide. Fran herself is not obsessed with food, being obsessed with sex. A first novel.