After reading just a little bit of Verax – The True History of Whistleblowers, Drone Warfare, and Mass Surveillance by Pratap Chatterjee and Khalil I knew this graphic novel was something special.

Publisher’s Summary: From prize-winning journalist Pratap Chatterjee and Khalil, the co-author of the best-selling Zahra’s Paradise, a sweeping graphic history of electronic surveillance from 9/11 to the latest drone strike

9/11 not only marked the worst domestic terror attack in U.S. history, but also unleashed electronic spying by the government on a massive worldwide scale. In a wholly original and engaging telling, Verax (“truth-teller” and one of Edward Snowden’s code names) recounts the full story of American electronic surveillance post 9/11, in brilliant comics form.

We follow Pratap Chatterjee, journalist sleuth, as he dives deep into the world of electronic surveillance and introduces its cast of characters: developers, companies, users, government agencies, whistleblowers, journalists, and, in a leading role, the devices themselves. He explains the complex ways governments follow the movements and interactions of individuals and countries, whether by tracking the players of Angry Birds, deploying “Stingrays” that listen in on phone calls or “deep packet inspection” that mines email, or by weaponizing programs with names like Howlermonkey and Godsurge to attack the infrastructure of states such as Iran and remotely guide the U.S. missiles used in drone killings. He chronicles the complicity of corporations like Apple, Verizon, and Google, and the daring of the journalists and whistleblowers―from Snowden to Julian Assange to the lesser-known NSA Four―who made sure that the world would know. Finally, he gives a prognosis for the future of electronic surveillance, and for the fortunes of those who resist it.  By condensing a crucial event of the 21st century and a broad, complex history into a compact, engaging, and vivid work, Verax is a significant contribution that is certain to last.

Besides the reminder of events that now seem to have happened a very long time ago but in reality it’s only a little over four years since Edward Snowden informed the world about the overreach of the NSA and how the agency had a problem with collecting too much data with too little ability to accurately analyze it.  The data collected was from all of us – innocent US and foreign citizens through our cell phones and computers.   As explained in Verax, the NSA “built the biggest data collection in the world, enough to watch the whole planet.”

Worse, though, were the senseless deaths of innocent men, women, and children because of human error as well as the government’s blind trust of software such as the phone location system of the DCGS that “was only up and working 33% of the time” and only has a location reliability between “one and two kilometers.”

But the mere mention of Edward Snowden rankles people such as my husband who labels Snowden a traitor.

This is the exact reason I recommend that he and anyone who really isn’t completely familiar with the intricacies of the surveillance capabilities of the 17 US intelligence agencies read Verax.  The NSA’s data collection system was unconstitutional, and that is why Snowden blew the whistle.

The content of Verax is heartbreaking, complex, and suspenseful – even if you know how it ends.  There is no doubt, the graphic novel format is an essential component for making the complex understandable as well as humanizing both the victims and those who carry out the drone strikes.

Likewise, anyone who questions the validity of the graphic novel format as serious literature, should read Verax.  Khalil’s artistry shows the relationship between the convoluted web of events, software programs, whistle-blowers, and government agencies.

Halliburton’s Army : How a Well-connected Texas Oil Company Revolutionized the Way America Makes War  – is the first book to show, in shocking detail, how Halliburton really does business, in Iraq, and around the world. From its vital role as the logistical backbone of the U.S. occupation in Iraq—without Halliburton there could be no war or occupation—to its role in covering up gang-rape amongst its personnel in Baghdad, Halliburton’s Army is a devastating bestiary of corporate malfeasance and political cronyism.

Pratap Chatterjee—one of the world’s leading authorities on corporate crime, fraud, and corruption—shows how Halliburton won and then lost its contracts in Iraq, what Dick Cheney and Donald Rumsfeld did for it, and who the company paid off in the U.S. Congress. He brings us inside the Pentagon meetings, where Cheney and Rumsfeld made the decision to send Halliburton to Iraq—as well as many other hot-spots, including Somalia, Yugoslavia, Uzbekistan, Afghanistan, Guantánamo Bay, and, most recently, New Orleans.

Zahra’s Paradise / story by Amir & Khalil ; written by Amir ; artwork by Khalil.  Set in the aftermath of Iran’s fraudulent elections of 2009, Zahra’s Paradise is the fictional story of the search for Mehdi, a young protester who has vanished into an extrajudicial twilight zone. What’s keeping his memory from being obliterated is not the law. It is the grit and guts of his mother, who refuses to surrender her son to fate, and the tenacity of his brother, a blogger, who fuses tradition and technology to explore and explode the void in which Mehdi has vanished. 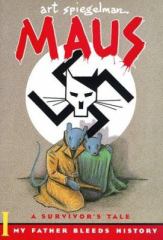 Maus : A Survivor’s Tale by Art Spiegelman – A brutally moving work of art—widely hailed as the greatest graphic novel ever written—Maus recounts the chilling experiences of the author’s father during the Holocaust, with Jews drawn as wide-eyed mice and Nazis as menacing cats.

Maus is a haunting tale within a tale, weaving the author’s account of his tortured relationship with his aging father into an astonishing retelling of one of history’s most unspeakable tragedies. It is an unforgettable story of survival and a disarming look at the legacy of trauma.