With humor and deep understanding of human nature, this week’s New Title Tuesday recommendation,  Five Carat Soul by James McBride, is a suite of dances – to borrow musical terminology – that can be performed (read) either separately or as a whole.  The arching stories are like melodies that rise and fall in a satisfying and moving rhythm. 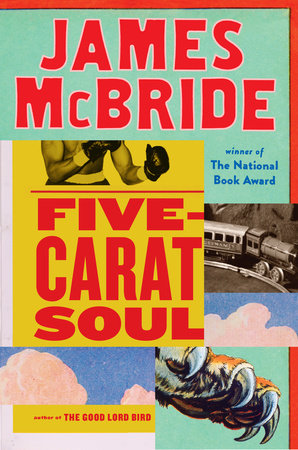 Publisher’s Summary: The stories in Five Carat Soul —none of them ever published before—spring from the place where identity, humanity, and history converge. They’re funny and poignant, insightful and unpredictable, imaginative and authentic—all told with McBride’s unrivaled storytelling skill and meticulous eye for character and detail. McBride explores the ways we learn from the world and the people around us. An antiques dealer discovers that a legendary toy commissioned by Civil War General Robert E. Lee now sits in the home of a black minister in Queens. Five strangers find themselves thrown together and face unexpected judgment. An American president draws inspiration from a conversation he overhears in a stable. And members of The Five-Carat Soul Bottom Bone Band recount stories from their own messy and hilarious lives.

As McBride did in his National Book award-winning The Good Lord Bird and his bestselling  The Color of Water, he writes with humor and insight about how we struggle to understand who we are in a world we don’t fully comprehend. The result is a surprising, perceptive, and evocative collection of stories that is also a moving exploration of our human condition.

One of the most appealing aspects of Five Carat Soul is that each story has its own beat, its own voice.  The Kirkus Review explains:

For instance: the first story, “The Under Graham Railroad Box Car Set,” is told from the point of view of a white antique-toy dealer who, upon encountering the black family who now own a rare 19th-century train set once given as a present to Robert E. Lee’s son, is nonplused by their willingness to give him the valuable artifact without haggling over money. There is also a poignant four-story cycle bearing the rubric “The Five Carat Soul Bottom Bone Band,” referring to a quintet of teen funk band musicians from an at-risk neighborhood in Uniontown, Pennsylvania, a Pittsburgh suburb. McBride is daring enough to apply his realist’s sensibilities to fantasy with “The Moaning Bench,” in which a flamboyant heavyweight boxer bearing the looks, sass, and swagger, if not the same name, as Muhammad Ali challenges hell’s satanic gatekeeper to fight for the souls of five quivering candidates for Eternal Damnation. The best is saved for last: “Mr. P & the Wind,” a five-part suite of stories set in a contemporary urban zoo whose menagerie communicates with each other—and at least one human—in what they call Thought Speak. The charm emitted by these whimsical-yet-acerbic tales seems to come from a hypothetical late-19th-century collaboration of Mark Twain and Rudyard Kipling.

McBride is the epitome of how being adept in a variety of areas informs and improves performance in each.  He started his college education studying music composition at Oberlin College and at the tender age of 22, received his Masters in Journalism from Columbia University.   So he knows a little something about the interplay of pulse and rhythm, texture (number of layers) and timbre (the unique quality of a sound).

This background is fundamental to the depth and tension in the stories in Five Carat Soul.  This is perhaps related to the fact that he has been writing them over a long period of time.  Lloyd Sachs of the Chicago Tribune wrote:

“As a social commentator, McBride would no sooner indulge in didacticism [teaching] than the rap-loving Gatekeeper would indulge in Dixieland. The author of the National Book Award-winning novel The Good Lord Bird possesses a biting wit, but disarms it with his calm, plainspoken style.” 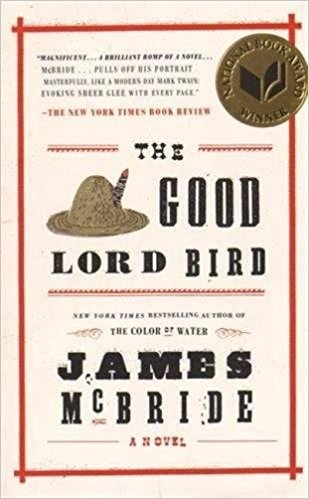 The Good Lord Bird – From the bestselling author of The Color of Water comes the story of a young boy born a slave who joins John Brown’s antislavery crusade—and who must pass as a girl to survive.

Henry Shackleford is a young slave living in the Kansas Territory in 1857, when the region is a battleground between anti- and pro-slavery forces. When John Brown, the legendary abolitionist, arrives in the area, an argument between Brown and Henry’s master quickly turns violent. Henry is forced to leave town—with Brown, who believes he’s a girl.Over the ensuing months, Henry—whom Brown nicknames Little Onion—conceals his true identity as he struggles to stay alive. Eventually Little Onion finds himself with Brown at the historic raid on Harpers Ferry in 1859—one of the great catalysts for the Civil War.An absorbing mixture of history and imagination, and told with McBride’s meticulous eye for detail and character, The Good Lord Bird is both a rousing adventure and a moving exploration of identity and survival. Winner of the 2013 National Book Award for Fiction and Winner of the Morning News Tournament of Books

The Color of Water – Who is Ruth McBride Jordan? A self-declared “light-skinned” woman evasive about her ethnicity, yet steadfast in her love for her twelve black children. James McBride, journalist, musician, and son, explores his mother’s past, as well as his own upbringing and heritage, in a poignant and powerful debut, The Color Of Water: A Black Man’s Tribute to His White Mother.

The son of a black minister and a woman who would not admit she was white, James McBride grew up in “orchestrated chaos” with his eleven siblings in the poor, all-black projects of Red Hook, Brooklyn. “Mommy,” a fiercely protective woman with “dark eyes full of pep and fire,” herded her brood to Manhattan’s free cultural events, sent them off on buses to the best (and mainly Jewish) schools, demanded good grades, and commanded respect. As a young man, McBride saw his mother as a source of embarrassment, worry, and confusion—and reached thirty before he began to discover the truth about her early life and long-buried pain.

In  The Color of Water, McBride retraces his mother’s footsteps and, through her searing and spirited voice, recreates her remarkable story. The daughter of a failed itinerant Orthodox rabbi, she was born Rachel Shilsky (actually Ruchel Dwara Zylska) in Poland on April 1, 1921. Fleeing pogroms, her family emigrated to America and ultimately settled in Suffolk, Virginia, a small town where anti-Semitism and racial tensions ran high. With candor and immediacy, Ruth describes her parents’ loveless marriage; her fragile, handicapped mother; her cruel, sexually-abusive father; and the rest of the family and life she abandoned.