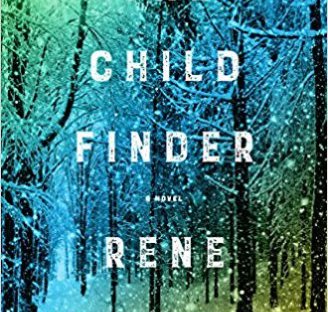 I chose The Child Finder by Rene Denfeld for the New Title Tuesday recommendation because not only is it a suspenseful mystery with a female private detective, but because the author handles the the horrific subject matter in a respectful and never gratuitous manner.  This is not surprising since the author is not only an author and journalist, she was a victim of child abuse and is the foster-adoptive mother of three now grown children from traumatic backgrounds.

Publisher’s Summary: A haunting, richly atmospheric, and deeply suspenseful novel from the acclaimed author of The Enchanted about an investigator who must use her unique insights to find a missing little girl.

“Where are you, Madison Culver? Flying with the angels, a silver speck on a wing? Are you dreaming, buried under snow? Or—is it possible—you are still alive?”

Three years ago, Madison Culver disappeared when her family was choosing a Christmas tree in Oregon’s Skookum National Forest. She would be eight-years-old now—if she has survived. Desperate to find their beloved daughter, certain someone took her, the Culvers turn to Naomi, a private investigator with an uncanny talent for locating the lost and missing. Known to the police and a select group of parents as “the Child Finder,” Naomi is their last hope.

Naomi’s methodical search takes her deep into the icy, mysterious forest in the Pacific Northwest, and into her own fragmented past. She understands children like Madison because once upon a time, she was a lost girl, too.

As Naomi relentlessly pursues and slowly uncovers the truth behind Madison’s disappearance, shards of a dark dream pierce the defenses that have protected her, reminding her of a terrible loss she feels but cannot remember. If she finds Madison, will Naomi ultimately unlock the secrets of her own life?

Told in the alternating voices of Naomi and a deeply imaginative child,  The Child Finder is a breathtaking, exquisitely rendered literary page-turner about redemption, the line between reality and memories and dreams, and the human capacity to survive.

When I was a child, I was scared of – ghosts, werewolves, aliens – the usual stuff.  When I grew to an independent adult, the fears were more tangible – losing my job, dark alleys, Hannibal Lecter-types.

But all of those fears were inconsequential compared to the terror I understood once I became a parent.  The fear of something bad happening to your child is exponentially more horrendous than anything else in the pantheon of fears.  So why would I read and recommend a book about such a gruesome topic?

As Lou Morgan wrote in The Guardian, “We seek out stories; stories which give us a place to put our fears. Books in particular let us pour our fear into them before we have so much of it sloshing around in our heads that we drown in it. Stories that frighten us or unsettle us – not just horror stories, but ones that make us uncomfortable or that strike a chord somewhere deep inside – give us the means to explore the things that scare us….”

To try and understand what is happening to her, Madison creates a fantasy world based on a fairy tale her mother read to her, The Snow Child by Eowyn Ivey.  Denfeld draws on her experience and training explaining in The Child Finder that abuse victims do better when they can find a way to play and escape into their imaginations.

As Kristin Centorcelli said in her review, Denfeld turns a “sympathetic eye toward the plight of foster children and the pain and trauma that they sometimes bring with them. This is as much Naomi’s story as it is Madison’s, and for all the awfulness and the pain, it’s ultimately a story of hope that will transform you if you let it. Never graphic, Denfeld’s lyrical writing mines the beauty found in the most harrowing of situations and affirms the human spirit and will to survive.”

The Enchanted – The enchanted place is an ancient stone prison, viewed through the eyes of a death row inmate who finds escape in his books and in re-imagining life around him. A female investigator searches for buried information from prisoners’ pasts that can save those soon-to-be-executed. Digging into the background of a killer named York, she uncovers wrenching truths that challenge familiar notions of victim and criminal, innocence and guilt, and reveals shocking secrets of her own. 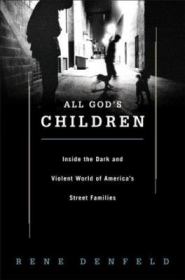 All God’s Children: Inside the Dark and Violent World of Street Families – In this dark and compelling portrait of one of America’s most frightening subcultures, Rene Denfeld draws on material gathered over a decade spent with the ‘families’, revealing the dark side of an American ideal, and the extremes to which desperate teenagers (the majority of whom hail from loving middle-class homes) will go in their search for a sense of a belonging.