Do Not Become Alarmed by Maile Meloy is this week’s New Title Tuesday selection because of its gripping and timely subject matter.  I read the entire book in one sitting because I had to know what happened to the children. 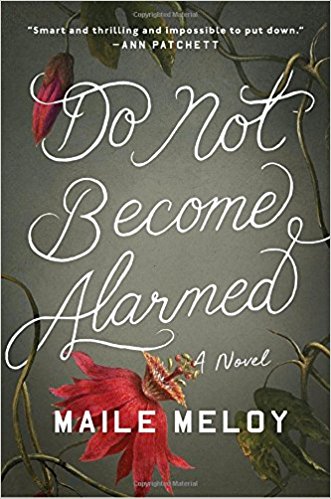 Publisher’s Summary: When Liv and Nora decide to take their husbands and children on a holiday cruise, everyone is thrilled. The adults are lulled by the ship’s comfort and ease. The four children—ages six to eleven—love the nonstop buffet and their newfound independence. But when they all go ashore for an adventure in Central America, a series of minor misfortunes and miscalculations leads the families farther from the safety of the ship. One minute the children are there, and the next they’re gone.

The disintegration of the world the families knew—told from the perspectives of both the adults and the children—is both riveting and revealing. The parents, accustomed to security and control, turn on each other and blame themselves, while the seemingly helpless children discover resources they never knew they possessed.

Do Not Become Alarmed is a story about the protective force of innocence and the limits of parental power, and an insightful look at privileged illusions of safety. Celebrated for her spare and moving fiction, Maile Meloy has written a gripping novel about how quickly what we count on can fall away, and the way a crisis shifts our perceptions of what matters most.

Before I became a parent, I was under the misconception that I knew a thing or two about fear.  However, upon giving birth, I quickly realized that there is no comparison between fear for your own life and fear for your child’s.  The former is akin to riding a tricycle whereas the latter is closely related to careening through the switchbacks of a narrow mountain road without brakes. Meloy’s prose captures that hormone-fueled intensity mothers experience once they transform from individual to tiger-mom.  As the character Liv said, “To have a child is to open an account at the heartbreak bank.”  Meloy doesn’t milk the situation or overplay the sentimentality, nor does she shy away from bleak realities.
As Julie Meyerson wrote in her review for The Guardian, “All credit to Meloy’s glistening prose that every detail of this grisly scene is shudderingly convincing. The sultry afternoon, the beautiful, sheltered Americans knocked off course by a routine accident but left with no choice but to trust in the local, the faint moments of comedy, the momentary lapses of attention – all of it rings uneasily true. Once the children are gone, everything accelerates and the plot unfurls swiftly and sleekly with chapters moving back and forth between adults and children with barely a viewpoint left unturned. As one queasy event follows another, it becomes clear that Meloy is not going to spare us – the children are alive, but for how long? – and there is no question of not reading on.”
I wouldn’t be surprised if Do Not Become Alarmed  is made into a movie simply because of the suspense and non-predictable ending.  But there are some thematic questions that emerge, such as Nora questions whether she has taught her biracial children to be too obedient and tamp down their anger.
Even with the grim subject matter, Do Not Become Alarmed  is a page-turner you may not be able to put down.
Happy Reading, Susan C
Also by Meloy:

Liars and Saints – Set in California, Liars and saints follows four generations of the Catholic Santerre family from World War II to the present, as they navigate a succession of life-altering events — through the submerged emotion of the fifties, the recklessness and excess of the sixties and seventies, and the reckonings of the eighties and nineties. In a family driven by jealousy and propriety as much as by love, an unspoken tradition of deceit is passed from generation to generation, and fiercely protected secrets gradually drive the Santerres apart. When tragedy shatters their precarious domestic lives, it takes astonishing courage and compassion to bring them back together.

Half in Love: Stories – Lean and controlled in their narration, abundant and moving in their effects, Maile Meloy’s stories introduce a stirling talent. Most are set in the modern American West, made vivid and unexpected in Meloy’s unsentimental vision; others take us to Paris, wartime London, and Greece, with the same remarkable skill and intuition.
For Middle Grades:

The Apothecary – It’s 1952 and the Scott family has just moved from Los Angeles to London. Here, fourteen-year-old Janie meets a mysterious apothecary and his son, Benjamin Burrows – a fascinating boy who’s not afraid to stand up to authority and dreams of becoming a spy. When Benjamin’s father is kidnapped, Janie and Benjamin must uncover the secrets of the apothecary’s sacred book, the Pharmacopoeia, in order to find him, all while keeping it out of the hands of their enemies – Russian spies in possession of nuclear weapons. Discovering and testing potions they never believed could exist, Janie and Benjamin embark on a dangerous race to save the apothecary and prevent impending disaster. Together with Ian Schoenherr’s breathtaking illustrations, this is a truly stunning package from cover to cover. Contains a teaser chapter of the sequel, The Apprentices