The Glass Castle by Jeannette Walls, A Reader’s Advisory

If you haven’t read The Glass Castle yet, you may want to put it at the top of your reading list. The film adaptation comes out today. Since the book’s release and rise to fame in 2005, author, Jeannette Walls refrained from making her memoir into a film until now.

If you want to read a vivid and unfiltered, harsh and inspiring story, The Glass Castle is the book for you.

Publisher’s Summary: “The Glass Castle” is a remarkable memoir of resilience and redemption, and a revelatory look into a family at once deeply dysfunctional and uniquely vibrant. When sober, Jeannette’s brilliant and charismatic father captured his children’s imagination, teaching them physics, geology, and how to embrace live fearlessly. But when he drank, he was dishonest and destructive. Her mother was a free spirit who abhorred the idea of domesticity and didn’t want the responsibility of raising a family.

The Walls children learned to take care of themselves. They fed, clothed, and protected one another, and eventually found their way to New York. Their parents followed them, choosing to be homeless even as their children prospered.

“The Glass Castle” is truly astonishing—a memoir permeated by the intense love of a peculiar but loyal family.

Jeannette Walls and her siblings had to grow up fast to survive, doing odd jobs so they’d have enough money to feed themselves along with foraging the woods for crab apples, stealing corn from gardens, digging in the school trash for scraps. Oftentimes, she and her family slept on a cardboard boxes in one of the houses or shacks the family squatted in or owned. All this time, Walls promised herself that one day she would never need to live like this again.

The detail that Walls instills into the descriptions of her family’s nomadic lifestyle moving from place to place to place, doing “the skadaddle,” as her dad puts it, to avoid bill collectors drops readers right down into tiny, but rough southwestern towns and busy, California cityscapes. Walls then transports readers to the coal mining, Appalachian mountain town of Welch, and finally to New York City where she and her siblings find freedom.

The Glass Castle surprises readers by exposing a familiar world with an arcane side of american life that will both haunt and inspire many for years to come. If you’d like to read the book before seeing the film, pick up a copy at the library or check out one of our preloaded Nooks today. 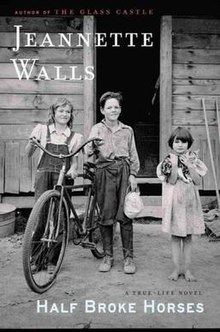 Walls narrates her grandmother’s story, the life of Lily Casey Smith, a frontierswoman who survived the rugged Arizona desert during the Great Depression. She broke wild horses and at fifteen and rode a pony five hundred miles to teach at a frontier town. While this is a work of fiction told by Walls from her grandmother’s perspective, it’s a true story about real people who lived through both tragedy and triumph in the southwest.

The Silver Star is a fictional story  told from the perspective of  twelve year-old “Bean” Holloway who has an older sister, Liz, and an artistic mother who suddenly grabs a bag and leaves them only with a few months worth of money. After many weeks after their mother leaves them, a police car shows up at their home and the girls decide it’s time to leave town so they catch a bus from California to Virginia, where they visit their Uncle Tinsley in his decaying mansion. There, they discover who their father is and learn why their mother left Virginia in the first place and never went back.

One response to “The Glass Castle by Jeannette Walls, A Reader’s Advisory”