While waiting for Sherman Alexie’s newest title, my Five Star Friday recommendation is War Dances, the 2010 winner of the Pen/Faulkner Award for fiction.  While we have many titles of of his to choose from (see below), this collection of short stories, poems, and short works is one of my favorites.

Publisher’s Summary: Sherman Alexie delivers a heartbreaking and hilarious collection of stories that explore the precarious balance between self-preservation and external responsibility in art, family, and the world at large.

With unparalleled insight into the minds of artists, laborers, fathers, husbands, and sons, Alexie populates his stories with ordinary men on the brink of exceptional change. In a bi-coastal journey through the consequences of both simple and monumental life choices, Alexie introduces us to these personal worlds as they transform beyond return. In the title story, a famous writer must decide how to care for his distant father who is slowly dying a “natural Indian death” from alcohol and diabetes, just as he learns that he himself may have a brain tumor. With “The Ballad of Paul Nonetheless,” Alexie dissects a vintage-clothing store owner’s failing marriage and his subsequent courtship of a Puma-clad stranger in various airports across the country.  “Breaking and Entering” recounts a film editor’s fateful confrontation with an adolescent who forcibly enters his house to steal his DVD collection.

Brazen, and wise, War Dances takes us to the heart of what it means to be human. The new beginnings, successes, mistakes, and regrets that make up our daily lives are laid bare in this wide-ranging and provocative new work that is Alexie at the height of his powers.

I first heard of Alexie when I saw the independent movie Smoke Signals then discovered The Absolutely True Diary of a Part-Time Indian winner of the National Book Award for Young People’s Literature.  Reading Alexie’s work is akin to driving on a narrow mountain road with switchbacks between hilarity and tragedy.  And although he writes from the perspective of a Native-American, War Dances speaks to anyone who has faced loneliness, illness, tended to dying and flawed parents, or felt disenfranchised.

As James Bradley wrote in the The Sydney Morning Herald review,  Alexie highlights “the ways in which life – like art – is a complex interplay between performance and truth. This awareness of the contradictions of identity, and of the complexities involved in telling the truth about them has long been at the centre of Alexie’s work.”

This interplay between truth and fiction is seen in the title story “War Dances” in which Alexie draws on his real-life experiences of having hydrocephalus as a baby and then discovering he had a benign brain tumor as an adult.  But in the story, the narrator provides a disclaimer for what was stated in the section “Exit Interview for My Father.”  As Bradley explained, Alexie reveals that “life – like art is the complex interplay between performance and truth.”

War Dances is a funny and heartbreaking read that will entertain and enlighten.

P.S.  I recommend putting a hold on Alexie’s latest You Don’t Have to Say You Love Me, A Memoir. 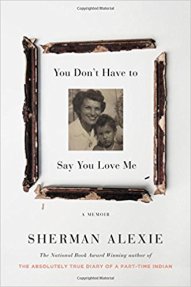 You Don’t Have to Say You Love Me, A Memoir  –  Family relationships are never simple. But Sherman Alexie’s bond with his mother Lillian was more complex than most. She plunged her family into chaos with a drinking habit, but shed her addiction when it was on the brink of costing her everything. She survived a violent past, but created an elaborate facade to hide the truth. She selflessly cared for strangers, but was often incapable of showering her children with the affection that they so desperately craved. She wanted a better life for her son, but it was only by leaving her behind that he could hope to achieve it. It’s these contradictions that made Lillian Alexie a beautiful, mercurial, abusive, intelligent, complicated, and very human woman.

When she passed away, the incongruities that defined his mother shook Sherman and his remembrance of her. Grappling with the haunting ghosts of the past in the wake of loss, he responded the only way he knew how: he wrote. The result is a stunning memoir filled with raw, angry, funny, profane, tender memories of a childhood few can imagine, much less survive. An unflinching and unforgettable remembrance, YOU DON’T HAVE TO SAY YOU LOVE ME is a powerful, deeply felt account of a complicated relationship. 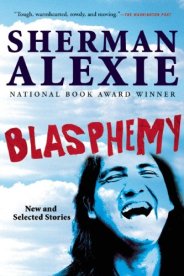 Blasphemy – New and Selected Stories –  A bold and irreverent observer of life among Native Americans in the Pacific Northwest, the daring, versatile, funny, and outrageous Alexie show­cases his many talents in Blasphemy, where he unites fifteen beloved classics with fifteen new stories in one sweeping anthology for devoted fans and first-time readers. Included here are some of his most esteemed tales, including “What You Pawn I Will Redeem,” in which a homeless Indian man quests to win back a family heirloom; “This Is What It Means to Say Phoenix, Arizona,” a road-trip morality tale; “The Toughest Indian in the World,” about a night shared between a writer and a hitchhiker; and his most recent, “War Dances,” about a man grappling with sudden hearing loss in the wake of his father’s death. Alexie’s new stories are fresh and quintessential, about donkey basket­ball leagues, lethal wind turbines, a twenty-four hour Asian manicure salon, good and bad marriages, and all species of warriors in America today.

Smoke Signals DVD   Story of the journey of two Coeur d’Alene Indian boys from Idaho to Arizona. Victor is the stoic, handsome son of an alcoholic father who has abandoned his family. Thomas is a gregarious, goofy young man orphaned as an infant by a fire which Victor’s father accidentally started while drunk. Thomas is a storyteller who makes every effort to connect with the people around him; Victor, in contrast, uses his quiet demeanor to gain strength and confidence. When Victor’s estranged father dies in Arizona the two young men embark on a journey to recover his ashes.  PG-13.

This dramatic feature was written, directed, and co-produced by Native Americans. Native American writer Sherman Alexie scripted this adaptation of his 1993 short story collection The Lone Ranger and Tonto Fistfight in Heaven. Director Chris Eyre’s previous short Someone Kept Saying Powwow is incorporated into the 88-minute feature. Developed at the Sundance Lab in 1995, the film was a winner of both the Audience Award and the Filmmakers’ Trophy at the 1998 Sundance Film Festival. 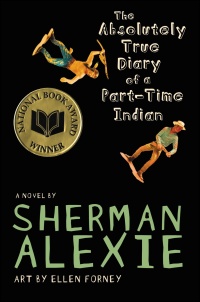 The Absolutely True Diary of a Part-Time Indian –  In his first book for young adults, bestselling author Sherman Alexie tells the story of Junior, a budding cartoonist growing up on the Spokane Indian Reservation. Determined to take his future into his own hands, Junior leaves his troubled school on the rez to attend an all-white farm town high school where the only other Indian is the school mascot.

Heartbreaking, funny, and beautifully written, The Absolutely True Diary of a Part-Time Indian, which is based on the author’s own experiences, coupled with poignant drawings that reflect the character’s art, chronicles the contemporary adolescence of one Native American boy as he attempts to break away from the life he was destined to live.

Flight – His first novel since Indian Killer is a powerful, fast, and timely story of a troubled foster teenager—a boy who is not a “legal” Indian because he was never claimed by his father—who learns the true meaning of terror.

The journey for this young hero begins as he’s about to commit a massive act of violence. At the moment of decision, he finds himself shot back through time and resurfaced in the body of an FBI agent during the civil rights era. Here he will be forced to see just why “Hell is Red River, Idaho, in the 1970s.” Red River is only the first stop in a shocking sojourn through moments of violence in American history. He will continue traveling back to inhabit the body of an Indian child during the battle at Little Bighorn and then ride with an Indian tracker in the nineteenth century before materializing as an airline pilot jetting through the skies today. During these frantic trips through time, his refrain grows: “Who’s to judge?” and “I don’t understand humans.” When finally, blessedly, our young warrior comes to rest again in his own contemporary body, he is mightily transformed by all he’s seen.

This is Sherman Alexie at his most brilliant—making us laugh while he’s breaking our hearts.

Thunder Boy Jr. Thunder Boy Jr. wants a normal name. One that’s all his own. Dad is known as Big Thunder, but Little Thunder doesn’t want to share a name.