The New Title Tuesday pick this week is The Red Car by Marcy Dermansky.  I didn’t know I needed a refreshing dose of intelligent self-realization literature infused with dark humor until I began this dream-like quick read about a woman at a turning point.

Publisher Summary:  A wildly imaginative, rebellious, and tender tale of independence from the critically acclaimed author of Bad Marie.

With each new novel, Marcy Dermansky deploys her “brainy, emotionally sophisticated” (New York Times) prose to greater and greater heights, and The Red Car is no exception.

Leah is living in Queens with a possessive husband she doesn’t love and a long list of unfulfilled ambitions, when she’s jolted from a thick ennui by a call from the past. Her beloved former boss and friend, Judy, has died in a car accident and left Leah her most prized possession and, as it turns out, the instrument of Judy’s death: a red sports car.

Judy was the mentor Leah never expected. She encouraged Leah’s dreams, analyzed her love life, and eased her into adulthood over long lunches away from the office. Facing the jarring disconnect between the life she expected and the one she is now actually living, Leah takes off for San Francisco to claim Judy’s car. In sprawling days defined by sex, sorrow, and unexpected delight, Leah revisits past lives and loves in search of a self she abandoned long ago. Piercing through Leah’s surreal haze is the enigmatic voice of Judy, as sharp as ever, providing wry commentary on Leah’s every move.

Following her “irresistible” (Time) and “wicked” (Slate) novel Bad Marie, Dermansky evokes yet another edgy, capricious, and beautifully haunting heroine—one whose search for realization is as wonderfully unpredictable and hypnotic as the twists and turns of the Pacific Coast Highway. Tautly wound, transgressive, and mordantly funny, The Red Car is an incisive exploration of one woman’s unusual route to self-discovery.

Initially, I wasn’t sure that I would end up appreciating the main character Leah because of her very questionable and sometimes mean college behavior that begins the book.  But, in the larger context, who am I to judge the reckless behavior of young adults?  However, it didn’t take long to become enmeshed in the quest and identify with Leah’s messy past and stalled present.

Through literary references to Sylvia Plath and Haruki Murakami and the ever present “ghost” of Judy questioning and commenting on Leah’s thoughts and actions, Dermansky deepens Leah’s story that looks at both the fear and the necessity of starting over.

The Red Car poses questions then careens to the next scene leaving the reader to figure it out later.  That’s OK because the story is the thing.  The car in the story is both vehicle and metaphor for how much control over our own lives are we willing to take?  Are we passengers or drivers or merely haunted?

As Marion Winik said in her Newsday review, “This seemingly artless but in fact very controlled novel is on one level, a fairy tale complete with fairy godmother, and on another, a whispered goad to the reader: Live the life you really want.”

The Red Car is a fast read and quasi – or anti – ‘road’ novel.  So get your motor running, but don’t go so fast that you get an expensive ticket. 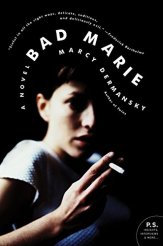 Bad Marie : Bad Marie is the story of Marie, tall, voluptuous, beautiful, thirty years old, and fresh from six years in prison for being an accessory to murder and armed robbery. The only job Marie can get on the outside is as a nanny for her childhood friend Ellen Kendall, an upwardly mobile Manhattan executive whose mother employed Marie’s mother as a housekeeper. After Marie moves in with Ellen, Ellen’s angelic baby Caitlin, and Ellen’s husband, a very attractive French novelist named Benoit Doniel, things get complicated, and almost before she knows what she’s doing, Marie has absconded to Paris with both Caitlin and Benoit Doniel. On the run and out of her depth, Marie will travel to distant shores and experience the highs and lows of foreign culture, lawless living, and motherhood as she figures out how to be an adult; how deeply she can love; and what it truly means to be “bad”.

Twins :  A tale told from the alternating viewpoints of identical teenage twin sisters finds their adolescent bond threatened by a new friend, parental neglect, unsuccessful vacations, eating disorders, and their turbulent first explorations of love and sex. On the eve of their thirteenth birthday, identical twins Chloe and Sue agree to get matching tattoos to prove their bond is stronger than DNA. So begins Twins, Marcy Dermansky’s comic and disturbingly honest debut novel, the extraordinary story of two blond, beautiful, and tormented twin sisters trying to survive adolescence and each other. Told in alternating voices, Twins introduces two new unforgettable heroines on the verge. The obsessively defiant Sue, four minutes younger, resents and idolizes her seemingly perfect twin, Chloe. All Chloe wants, however, is to please her sister and, only if Sue will allow it, find a friend of her own. Neglected by their wealthy parents and cynical older brother, burdened by a loving dog they can’t properly care for, and bewildered by a complex social universe they somehow don’t fit into, Chloe and Sue are left to fend for themselves. Over the course of five years, Chloe and Sue overcome breakups, unhappy Hawaiian vacations, unicycle lessons, eating disorders, pill abuse, and their first painful explorations of love and sex. They desperately seek comfort in unusual places, choosing often inappropriate friends and lovers, including the daring Lisa Markman, an aspiring fashion model; her famous father, a professional basketball player; James, a good natured slacker; and a young Indian writer named Smita. Navigating this hilarious and heartbreaking world, the girls must overcome apathy and despair to return to each other. Funny, affecting, and told with raw understanding, Twins brings us into the wounded hearts of audacious teenagers, where the line between hatred and love is blurred and where everyone, including the family pet, is vulnerable to devotion. Marcy Dermansky’s heart stopping debut displays comedy and redemption in the face of suburban despair.