“It makes you wonder. All the brilliant things we might have done with our lives if only we suspected we knew how.” ― Ann Patchett, Bel Canto

My Five Star Friday recommendation, Bel Canto by Ann Patchett, is strikingly relevant despite its publication date of 2001.  An unapologetic opera lover, Patchett cocoons her diverse characters in the universality of music and art in the absence of a common language. 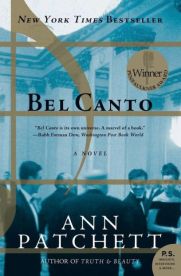 Publisher Summary:  Somewhere in South America, at the home of the country’s vice president, a lavish birthday party is being held in honor of Mr. Hosokawa, a powerful Japanese businessman. Roxanne Coss, opera’s most revered soprano, has mesmerized the international guests with her singing. It is a perfect evening — until a band of gun-wielding terrorists breaks in through the air-conditioning vents and takes the entire party hostage. But what begins as a panicked, life-threatening scenario slowly evolves into something quite different, as terrorists and hostages forge unexpected bonds and people from different countries and continents become compatriots.

Without the demands of the world to shape their days, life on the inside becomes more beautiful than anything they had ever known before. At once riveting and impassioned, the narrative becomes a moving exploration of how people communicate when music is the only common language. Friendship, compassion, and the chance for great love lead the characters to forget the real danger that has been set in motion and cannot be stopped.

I first read the 2002 Pen/Faulkner Award winner more than a decade ago, and was inspired to re-read after learning that the Lyric Opera of Chicago was planning a world premiere of an original setting of this story.  Certainly, the novel, so laden with musical references and themes, would be a perfect for opera.  Its thematic relevance is that Patchett based her novel on the 1996 hostage crisis at the Japanese Embassy in Lima, Peru, that resulted in 72 people being held for four months.

As I re-read Bel Canto, I was reminded of the author’s expertise in creating harmony between her words and her keen knowledge of human relationships. As the goodreads.com review states, “With the omniscience of magic realism, Ann Patchett flits in and out of the hearts and psyches of hostage and terrorist alike, and in doing so reveals a profound, shared humanity. Her voice is suitably lyrical, melodic, full of warmth and compassion.”

Overtime, the terrorists and hostages begin to forge relationships despite (or because of) the language barriers. In other words, romance grows as persistently (and as doomed) as weeds in a sidewalk crack.  As the tension builds before a secret tryst between Roxane and her lover, Patchett writes:

“How much does a house know?  There could not have been gossip and yet there was a slight tension in the air, the vaguest electricity that made men lift their heads and look and find nothing.  The salted fish and rice that came for dinner did not go down well and one after the other they put their shares on the table and walked away.”

The novel Bel Canto ends differently than the opera, but I believe both endings are successful within their forms. Bel Canto the Opera was composed by Jimmy López with a libretto by Pulitzer Prize-winning playwright Nilo Cruz and curated by legendary
soprano Renée Fleming, Lyric’s creative consultant. The world premiere was aired on PBS’s Great Performances.

In all, Bel Canto is still a literary gem and a humanist view on the complicated intricacies of relationships and the effect of artistic expression on the soul.

Commonwealth One Sunday afternoon in Southern California, Bert Cousins shows up at Franny Keating’s christening party uninvited. Before evening falls, he has kissed Franny’s mother, Beverly– thus setting in motion the dissolution of their marriages and the joining of two families. Spanning five decades, Commonwealth explores how this chance encounter reverberates through the lives of the four parents and six children involved. Spending summers together in Virginia, the Keating and Cousins children forge a lasting bond that is based on a shared disillusionment with their parents and the strange and genuine affection that grows up between them.

This is the Story of a Happy Marriage  Ann Patchett, author, examines her deepest commitments– to writing, family, friends, dogs, books, and her husband– creating a resonant portrait of her life.

State of Wonder A researcher at a pharmaceutical company, Marina Singh journeys into the heart of the Amazonian delta to check on a field team that has been silent for two years, a dangerous assignment that forces Marina to confront the ghosts of her past.

Run  Tip and Teddy Doyle’s mother died and their father is raising them. He wants theboys to be involved with politics, even though they don’t want to. 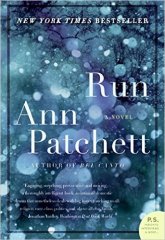