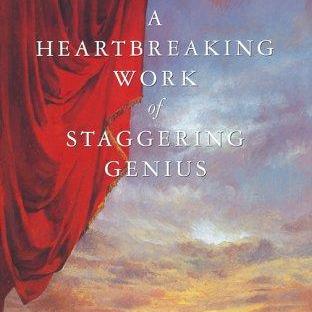 The Five Star Friday selection this week, A Heartbreaking Work of Staggering Genius by Dave Eggers, hearkens back to the Gen-X hype of the 1990’s.

Summary: The literary sensation of the year, a book that redefines both family and narrative for the twenty-first century. A Heartbreaking Work of Staggering Genius is

the moving memoir of a college senior who, in the space of five weeks, loses both of his parents to cancer and inherits his eight-year-old brother. Here is an exhilarating debut that manages to be simultaneously hilarious and wildly inventive as well as a deeply heartfelt story of the love that holds a family together.

It comes complete with rules and suggestions for enjoying the book which include skipping whole sections and apologizing for the book being “uneven.”  Yeah, and the author is upfront in owning the “endlessly self-conscious” book aspect.  Plus, you’ll likely end up grinning at phrases such as this 15th suggestion in the Acknowledgements:  “O) THE ASPECT CONCERNING THE UNAVOIDABILITY, GIVEN THE SITUATION WITH BROTHER, OR NEAR-CONSTANT POIGNANCE.”

Humor and heartbreak are puzzled together in Egger’s memoir, and the reader cannot help but appreciate the remarkable craft, the immediacy, of his writing. One example is seen when the brothers are facing the financial impact of losing their parents.

….And were soon struck with the relatively dingy reality of our new lives.  There would no longer be hill, or views-that sublet was a freak occurrence.  We would have no garage, no washer and dryer, no dishwasher, no disposal, no closets, no bathtub.  Some of the places we saw didn’t even have doors on the bedrooms.  I felt terrible, felt personally responsible; I began to look without Toph, to spare him the gore.  We were in decline.

Eggers could have relied simply on the facts of his unconventional life as sudden guardian of a sibling and written a terrific tale.  But he turns convention inside out, pushing out the boundaries of form and genre.

As Publishers Weekly described in its review:

“Literary self-consciousness and technical invention mix unexpectedly in this engaging memoir by Eggers, editor of the literary magazine McSweeney’s and the creator of a satiric ‘zine called Might, who subverts the conventions of the memoir by questioning his memory, motivations and interpretations so thoroughly that the form itself becomes comic. Despite the layers of ironic hesitation, the reader soon discerns that the emotions informing the book are raw and, more importantly, authentic.”

A Heartbreaking Work of Staggering Genius garnered a lot of attention when it was published: including 2000 Time, Washington Post, San Francisco Chronicle, Los Angeles Times, and Best Book of the Year, 2000 New York Times Book Review Editors’ Choice, and was a 2001 Pulitzer Prize for General Non-Fiction finalist.

I recommend reading the entire book, especially the parts Eggers said to skip.

e Circle   When Mae Holland is hired to work for the Circle, the world’s most powerful internet company, she feels she’s been given the opportunity of a lifetime. The Circle, run out of a sprawling California campus, links users’ personal emails, social media, banking, and purchasing with their universal operating system, resulting in one online identity and a new age of civility and transparency.