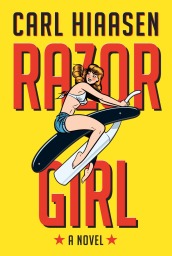 The New Title Tuesday choice is one of Carl Hiaasen’s Razor Girl, the latest in a long list of cray-cray yarns composed from a palette culled from wacky real-life events oddly common in Florida.  And Hiaasen would know having lived there since his birth.

Michael Schaub for  NPR says in his review:  “His latest book, Razor Girl, is at turns gleefully obscene, shockingly violent and riotously funny. In other words, it’s Carl Hiaasen doing what he does best…. Razor Girl is vintage Hiaasen, in the very best way: darkly funny, unapologetically crazy, and more Florida than a flamingo eating a Cuban sandwich while singing a Jimmy Buffett song.”

Summary:  When Lane Coolman’s car is bashed from behind on the road to the Florida Keys, what appears to be an ordinary accident is anything but (this is Hiaasen!). Behind the wheel of the other car is Merry Mansfield–the eponymous Razor Girl–and the crash scam is only the beginning of events that spiral crazily out of control while unleashing some of the wildest characters Hiaasen has ever set loose on the page.

There’s Trebeaux, the owner of Sedimental Journeys–a company that steals sand from one beach to restore erosion on another . . . Dominick “Big Noogie” Aeola, a NYC mafia capo with a taste for tropic-wear . . . Buck Nance, a Wisconsin accordionist who has rebranded himself as the star of a redneck reality show called Bayou Brethren . . . a street psycho known as Blister who’s more Buck Nance than Buck could ever be . . . Brock Richardson, a Miami product-liability lawyer who’s getting dangerously–and deformingly–hooked on the very E.D. product he’s litigating against . . . and Andrew Yancy–formerly Detective Yancy, busted down to the Key West roach patrol after accosting his then-lover’s husband with a Dust Buster.

Yancy believes that if he can single-handedly solve a high-profile murder, he’ll get his detective badge back. That the Razor Girl may be the key to Yancy’s future will be as surprising as anything else he encounters along the way–including the giant Gambian rats that are livening up his restaurant inspections. (Hiaasen’s Website)

Hiaasen’s career as a columnist for the Miami Herald no doubt gives him a front-row seat to the calamities some Floridians find themselves.  But this career in journalism surely informs the way he writes the fast-paced hilarious dialogue between his wide variety of characters.

Not to mention that Hiaasen has authored a host of novels for both adults and children including Bad Monkey which introduced former detective now restaurant inspector, Andrew Yancy.

The plots of Hiaasen’s novels are exceedingly difficult to describe. His stories are as intricate as they are fast-paced, and the sheer number of characters he includes in each book makes summarizing them next to impossible, unless you want to sound like a stoner describing The Big Lebowski to a friend who’s never seen it.

So let’s just say that when all is said and done, the reader has been introduced to countless crooks and lowlifes, an elderly man who dies of a heart attack while trying to scrape an Obama bumper sticker off his neighbor’s car, a thief with an ill-tempered pet mongoose, a drug that causes “random tissue deformities and life-threatening erections,” and more Gambian pouched rats than you’ve probably ever read about. (Yes, they are real, and they are terrifying.)  –Straub

In full disclosure, you should request Razor Girl and expect to wait since it’s best-seller status makes it in high demand.

Other books for adults by Hiaasen: 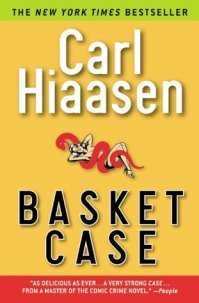 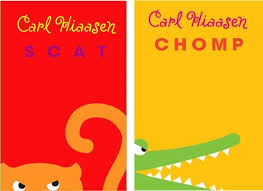