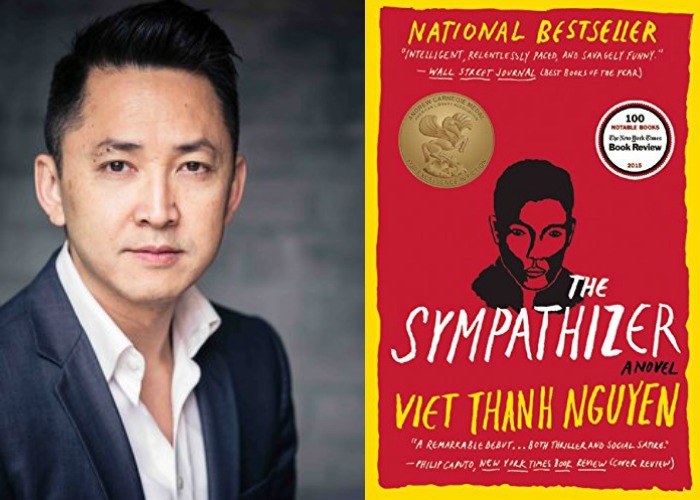 When I brought Viet Thanh Nguyen’s The Sympathizer home from the library, my husband tried to claim ‘first dibs.’

His curiosity was piqued by the cover comment “A remarkable debut…both thriller and social satire.”  My husband reminded me he’d finished his last book and loves a good spy novel.

Still, why should I give in?   After all, this is exactly the kind of fiction that attracts me: “darkly comic” and “satirical” while also addressing the decidedly un-funny Vietnam War from the perspective of a communist spy.

I imagine you’re scowling now, thinking it’s treasonous and possibly un-American to consider the point of view that led to the deaths of our young soldiers.

But many of us grew up in the gray-blue light of TV news footage of wounded and dead soldiers in Vietnam, Walter Cronkite and the unceasing tally of casualties and deaths, images of protesters burning draft cards, and, to quote Cosby, Stills, Nash, & Young: “4 dead in Ohio” at the hands of the National Guard during a student protest at Kent State.   It’s natural to have conflicted feelings about the role the US played in the war and our clumsy exit from Southeast Asia.

But back to the ‘first dibs’ claim.  I should read The Sympathizer first just to spite, uh; I mean, see if my husband the hawk would even like it.  Besides, I was the one who took the effort to go to the library and critically comb through the “New Additions” shelves for the ‘just right’ book to follow my last completed novel, one that would fit my mood and complement the audio book on the iPod in my car.

I was hooked by the very first lines:

“I am a spy, a sleeper, a spook, a man of two faces. Perhaps not surprisingly, I am also a man of two minds. I am not some misunderstood mutant from a comic book or a horror movie, although some have treated me as such. I am simply able to see any issue from both sides.”

The story begins just before the fall of Saigon in 1975.  The narrator, a junior officer to a South Vietnamese general, is half Vietnamese and half French.  The general loves all things American and French.  Rather than bother with it himself he left it to his junior officer to read the books by Mao, Marx, and Lenin in order to understand what fueled the enemy’s mindset.  We learn early on what led the narrator, a captain, to sympathize with the communists.

After voraciously reading the first 100 pages, I needed to learn more about this talented and funny writer.  A Google search brought up an interview on NPR’s All Things Considered, April 11, 2015.  Nguyen was four years old when he and his family arrived as refugees in the U.S. in April, 1975.  He grew up American and Americanized yet he said,“…this shadow of the war and of history hung over me, because I was constantly hearing stories about what had happened to the Vietnamese people from my parents or from the extended Vietnamese community that I was living in. And so I just absorbed that sense of a persistent memory, of persistent trauma, of this feeling that the war was not over….”

Nguyen affirmed what I initially suspected that his novel had in fact been described as anti-American.  But it has also been called a great American novel as well as a great Vietnamese novel.  As the author said, it could potentially be all of those things.  You can learn more about his family’s harrowing experience leaving Vietnam and trials they faced after arriving in the US, in his lengthy conversation with Terri Gross on Fresh Air May 17, 2016.

Not only is Viet Thanh Nguyen’s The Sympathizer the 2016 Pulitzer Prize winner, it was also awarded an Andrew Carnegie Medal for excellence in fiction.  In 2015, the New York Times listed it as one of 2015’s 100 Most Notable Books and it was Amazon’s Best Book of April 2015.

Despite what we think we know about the war in Vietnam, there is always more to learn – even if, especially if – it’s from a work of fiction.  Fiction has a “truthiness” that provides a context and allows us to understand and empathize with those who have other points of view.

The Sympathizer is a tantalizing must-read.  As the Boston Globe reviewer, Claire Messud, wrote, “I had that kid-like feeling of being inside the book.”

My husband didn’t have to wait very long for the book after all.