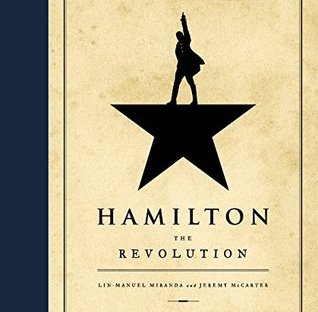 A quick description for those who may not know what Hamilton: The Revolution is: a musical that uses hip-hop to tell the story of Alexander Hamilton, one of the founders of the United States.  This book is not just the libretto, but also the story behind the musical.

I have not heard this libretto performed, yet, so the part of Hamilton that stuck out the most for me was not the music (which might change after I hear it live) but the enormous amount of research that Miranda put into the creation of it. I also enjoyed the copious details of his creative process. Every artist takes a different route to produce a masterpiece. Miranda credits the love for his wife as the foundation of this work, even calling Hamilton: The Revolution a “love letter” to her. Love seems to be the driving force behind most creative endeavors, doesn’t it?

Back to the history behind Hamilton: I loved that Miranda included photographs of the actual documents and direct quotations from the figures of the period. This isn’t just a fun musical that uses hip hop to tell its story. This is history being retold in a way that appeals to modern sensibilities.

About Hamilton’s ambition that is highlighted in the song My Shot, Miranda says: “A character needs to want something pretty badly to sing about it for two and half hours… Alexander Hamilton lived hard, wrote fast, and hustled his a** off. “For to confess my weakness, Ned,” he wrote to a friend at age 14, “my Ambition is prevalent.” This man was born to perform an “I want” song. pg 21 I don’t know that I knew what the word ‘ambition’ meant at 14… a sign of things to come perhaps.

I loved all of the information about the set construction and having New York itself as the background: “The founders tended to be country boys. Washington, Jefferson, Adams, and many other key figures of the revolution hailed from, and frequently returned to, estates and farms out of town… It’s no wonder that John Adams, who despised Hamilton, also despised the town and its citizens: “They talk very loud, very fast, and all together,” he complained…” pg 38 Still rather true today, yes? I tease… 🙂

Hamilton’s actual love poem to Eliza about which, Miranda says, “(she) wore it in a necklace for the rest of her life”:

“Before no mortal ever knew, A love like mine so tender, true, Completely wretched- you away, And but half blessed e’en while you stay. If present love (illegible) face, Deny you to my fond embrace, No joy unmixed my bosom warms, But when my angel’s in my arms.” pg 69 He wooed her with poetry- smart man.

I enjoyed the introduction to the role of Angelica Schuyler, an incredibly bright woman in a time when she couldn’t really use that intellect in a constructive way. In this passage, Miranda talks about how difficult her brilliant character is to portray and how hard her lines are to say: “Renee was the first one who came in and made us say, ‘Oh, she thinks exactly that fast,” he recalls. Her whirring brain made Angelica come alive in a new way… Renee acknowledges that she does indeed think pretty fast- “too fast to have good handwriting.”pg 79 That must be why I have bad handwriting too. haha…

I loved the empowering message of Hamilton: “There are plenty of debatable lessons to be drawn from Alexander Hamilton’s life, but that one is clear. The poor bastard orphan from the islands ought to have died a dozen times but somehow lived to help to found the nation. As a leader of the new republic, he fought to make it easier for people like him to travel as far as their talent would take him. “There are strong minds in every walk of life that will rise superior to the disadvantages of situation and will command the tribute due to their merit,” Hamilton wrote in The Federalist No. 36. Look no further than his own life for proof of that statement.” pg 149 Loved that.

One of the rules of fostering creativity is to not be afraid to make mistakes. They were very brave in the development of Hamilton: “Lin, Tommy, and their collaborators shared an eagerness to try things- to try everything- to find what worked best. “New discoveries, new mistakes” was the daily goal that Tommy had announced for the company at their first rehearsal the previous November. It’s a way of affirming the very American view that Benjamin Franklin offered in 1786, when someone asked him how the new Union was getting along: “We are, I think, in the right road of improvement, for we are making experiments.” pg 206

The pages of this book are simply packed with the stories, anecdotes, and behind-the-scenes hijinks of the creators, actors/actresses, and historical figures behind Hamilton: The Revolution. Pick it up and treat yourself to the newest Broadway sensation- winner of the 2016 Pulitzer Prize for Drama and eleven Tonys. It’s amazing and well worth the time.  Thanks for reading! -Heidi

The full text of this review also appeared on Heidi’s blog.