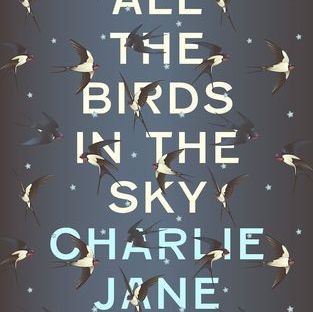 All the Birds in the Sky is about science vs nature, the end of the world, and love- in no particular order. Laurence and Patricia have two of the roughest childhoods that I’ve read so far this year. Their parents are duds, their school administrators are awful, and their peers are bullies and sadists. Somehow, despite these tragic beginnings, Laurence and Patricia manage to rise above and become something more, something extraordinary. And, together, they just might manage to save the world.

My favorite part of this book was the beginning- the development of the characters and the introduction to the extraordinary world of Laurence and Patricia. In this world, animals can talk! Here’s the “Parliament of Birds”: “Various other birds piped up, saying, “Point of order!” and a fidgety crow was listing important areas of Parliamentary procedure. One of them was so insistent that the eagle was forced to yield the branch to the Honorable Gentleman from Wide Oak- who then forgot what he was going to say.” pg 19 Politicians are politicians, no matter their species.

I loved Laurence’s internal dialogue: “Hey, Larry Fairy,” Brad Chomner said at school, “think fast.” Which was one of those phrases that never made sense to Laurence: People who told you to “think fast” were always those who thought much more slowly than you did. And they only said it when they were about to do something to contribute to the collective mental inertia.” pg 23

I also connected with Patricia. She’s imperfect, ruminative, and totally relatable: “Patricia felt jittery about throwing her first ever dinner party, because part of her clung to the fantasy of being someone who gathered cool people around her. A doyenne, someone who held witty salons. She cleaned the apartment for hours, made a playlist, and baked bread and bundt cake. … Patricia’s bread filled the marigold kitchenette with a yeasty warmth, and she took a deep breath. She was a grown-up. She had this.” pg 165 I’ve said that exact thing to myself when I’m stressed or trying to do something outside of my comfort zone. “I’m a grown-up. I have this.” Wish I was better at convincing myself of the truth of it. 🙂

Laurence contemplating reality: “I wonder how many other things in our world are just the shadows of things in other places,” Laurence said, forming the thought as he spoke. “I mean, we always suspected that gravity was so weak in our world because most of it was in another dimension. But what else? Light? Time? Some of our emotions? I mean, the longer I live, the more I feel like the stuff I see and feel is like a tracing of the outline of the real stuff that’s beyond our perceptions.” pg 186 I feel like that sometimes too.

Anders writes some very touching passages about love and being in love: “… Laurence watched her the whole way back up the block, wondering if she would look back at him over her shoulder, or turn to wave one last time. She didn’t. His heart skidded like a dirt bike on black ice as he watched her disappear.pg 213 You can really feel the emotions sliding around his chest, can’t you? I can.

I did not like some of Anders transitions in All the Birds in the Sky, particularly the jarring leap of time between the childhoods and then adulthoods of Laurence and Patricia. I also thought that Anders relied on synchronicity a bit too much to bring the two main characters together and keep the story rolling. But, life is strange and full of unexplainable moments. And, to be fair, I’m complaining about synchronicity in a world where (view spoiler). Maybe I need to check my own perception of reality…

If you enjoyed this book, maybe you should try The Many Selves of Katherine North by Emma Geen or A Monster Calls by Patrick Ness.

Thanks for reading! -Heidi