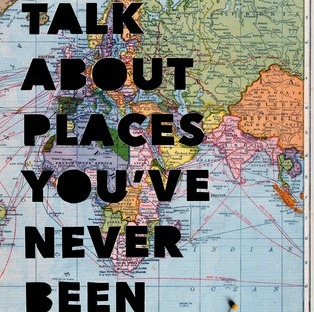 How to Talk About Places You’ve Never Been is a funny little book. At first, I couldn’t figure out what tone the author was wanting to convey because he, quite seriously, discusses why and how to describe places that the reader has never been- a topic that I, before I read this, didn’t take seriously at all. I finally settled my inner dialogue to “slightly grizzled professor who is smiling while lecturing” and that seemed to fit the bill.

There’s a lot to enjoy in here like Marco Polo’s hilarious description of unicorns. Polo is presented as an armchair traveler because he left out so many important details about the area he was describing (like the Great Wall) and, quite brazenly, just made other stuff up: “They have great numbers of elephants and also great numbers of unicorns, which are not smaller than the elephants. Here is what they look like: they have the same hide as a buffalo, feet like an elephant, and they have very thick, black horns in the middle of their foreheads.” pg 9 Oddly enough, that sounds rather like the Siberian unicorn, doesn’t it? Only problem is- they became extinct so long ago, that Polo would have never seen one.

The character Phileas Fogg from Around the World in Eighty Days by Jules Verne, goes around the world and never leaves his cabin to see the sights. Bayard thinks this is an excellent strategy: “The idea of staying in your cabin for the entire journey highlights the importance of the imagination and reflection in our approach to place. These are activities that Fogg is able to commit himself to completely vis-a-vis the places passed through, with all the more energy because he doesn’t waste precious time visiting them.” pg 29

Chateaubriand went beyond simply trying to describe his travels in Ohio, he put an island into the middle of it in his “memoir” and Bayard applauds his imaginative creation as precise accuracy of physical locations is not what is necessarily important to an armchair traveler:“As Jean-Claude Berchet recalls, (the island) was first situated in what is now Florida at the time of Travels in America. Migrating, it then made a foray into the Mississippi at the time of an 1834 manuscript, before, following its movement northward, it found itself here in Ohio, several thousand kilometers away, clearly justifying the epithet of “a floating island.” pg 57

Bayard’s reasons why the reader may, one day, have to convince someone that they had been somewhere that they actually had not been: “The first is adultery. … The second, murder, is fortunately less common, but any one of us might become confronted with the necessity of having to take this route to ensure our peace and quiet one day.” pg 103 How exciting and dramatic! And here I thought this book was just about sitting in your chair and day dreaming. 🙂

“It is impossible to hope to speak with any conviction of places you haven’t been to without a vivid imagination. The capacity to dream and to make others dream is essential to anyone wanting to describe an unknown place and hoping to capture the imagination of their readers and listeners.” pg 123 Dream on, readers, dream on!

If you enjoyed How to Talk About Places You’ve Never Been, you may want to pick up The Art of Travel by Alain de Botton or The Art of Non-Conformity: Set Your Own Rules, Live the Life You Want, and Change the World by Chris Guillebeau but, keep in mind, these books recommend that you actually go to the places, not just dream it.