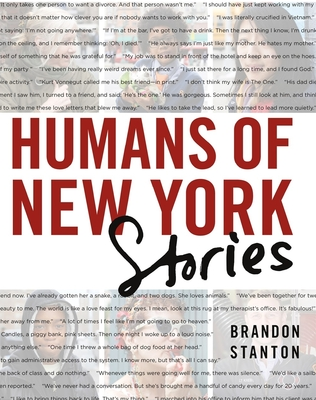 Everyone–and I mean everyone–has a story.

Brandon Stanton is a photographer and blogger who set out with his camera and one mission: to create a photographic census of New York.  He believes that everyone–every person you pass on the sidewalk, every driver next to you on the way to work–has something to say.

Stanton’s work can be found on Instagram and Twitter, and he previously published a similar project in the first Humans of New York.  The idea is simple:  he approaches people on the street, asks them simple questions, and posts pictures with small captions of their story.

One picture shows a couple with the caption “She still gets giddy when she sees a firefly.”  Another shows a young girl saying, “For the longest time, I was so focused on being deaf in my left ear that I almost forgot my other ear was perfectly fine.”  Other stories are deeper–telling of divorce, death, heartbreak–while others are whimsical, others a little nutty, and some absolutely heartwarming.

This story is a glimpse into just a few hundred stories, which is interesting enough; but, more than that, it makes you see the people around you differently.  At the end of the day, we’re all just humans–regardless of gender, race, religion, background–just trying to figure out this thing called life.  We all have struggles, we all have questions, we all have stories.  Sometimes we just need to ask to hear it.

Thanks for reading! -Autumn