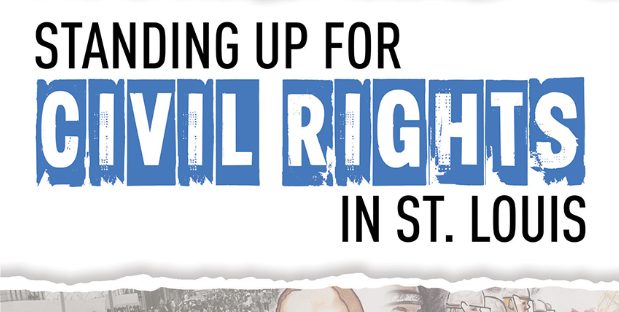 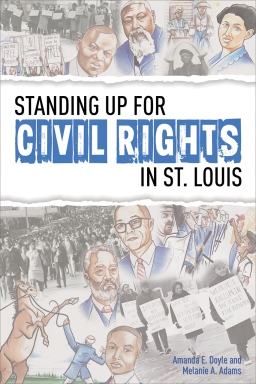 Standing Up for Civil Rights in St. Louis
Written by Amanda E. Doyle
and Melanie A. Adams
Recommended for ages 9+

From the Publisher: St. Louis occupies a special place in the long struggle of African Americans for civil rights and equal justice. The city housed a small but thriving population of free African Americans even before the Civil War. It was, also, the location of the first large-scale Emancipation Proclamation, even before Lincoln issued its more famous successor. Last, a number of early, successful civil rights lawsuits, ultimately known as freedom suits, were tried in St. Louis city. Standing Up for Civil Rights in St. Louis tells the stories of the many ordinary men and women who took extraordinary steps to fight for equal rights in St. Louis.

“Written for upper elementary school readers, the book presents the long arc of the struggle for civil rights. Giving young readers a new perspective that goes beyond the iconic Southern scenes of the 1950s and ’60s, authors Doyle and Adams range across history to tell the whole story, moving from pre-Civil War St. Louis to the events in Ferguson in 2014. 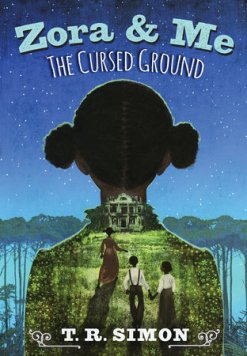 Zora & Me – The Cursed Ground
Written by T. R. Simon
Recommended for ages 10+

From the Publisher: When Zora Neale Hurston and her best friend, Carrie Brown, discover that the town mute can speak after all, they think they’ve uncovered a big secret. But Mr. Polk’s silence is just one piece of a larger puzzle that stretches back half a century to the tragic story of an enslaved girl named Lucia. As Zora’s curiosity leads a reluctant Carrie deeper into the mystery, the story unfolds through alternating narratives. Lucia’s struggle for freedom resonates through the years, threatening the future of America’s first incorporated black township — the hometown of author Zora Neale Hurston (1891-1960). In a riveting coming-of-age tale, award-winning author T. R. Simon champions the strength of a people to stand up for justice.

While Zora & Me – The Cursed Ground is the second book in a series, it holds its own as a standalone novel. Compelling and realistic, this story moves seamlessly between the present for Zora and Carrie and fifty years prior, telling the story of an enslaved girl named Lucia. As the mystery begins to unravel, the connection between the two stories is revealed in a surprising way.

Simon addresses the brutality of slavery without apology or reserve, which may make this book uncomfortable for some readers. It also examines the attitudes of racism and prejudice that persist over time, as well as the lasting repercussions of those beliefs. Powerfully engaging and thought-provoking, Zora & Me – The Cursed Ground is an excellent and eye-opening read for middle-grade students. 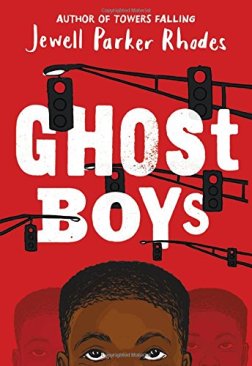 From the Publisher: Twelve-year-old Jerome is shot by a police officer who mistakes his toy gun for a real threat. As a ghost, he observes the devastation that’s been unleashed on his family and community in the wake of what they see as an unjust and brutal killing. Soon, Jerome meets another ghost: Emmett Till, a boy from a very different time but similar circumstances. Emmett helps Jerome process what has happened, on a journey towards recognizing how historical racism may have led to the events that ended his life. Jerome also meets Sarah, the daughter of the police officer, who grapples with her father’s actions.

Jewell Parker Rhodes deftly weaves historical and socio-political layers into a gripping and poignant story about how children and families face the complexities of today’s world. Told in alternating perspectives, Ghost Boys is a moving, hopeful story of life-after-death that shows readers it is their duty to stand by what they believe in and use their lives to promote positive change.

While realistic and honest, Ghose Boys is gentle enough for young readers and is delivered in the relatable perspective of a twelve-year-old boy. An excellent book for in-depth discussions about privilege and prejudice, Ghost Boys is an important read for middle-grade students.

To check out these books or for more recommendations, please visit the OFPL Children’s Department!

View all posts by engillman