In the spirit of the season, rather than one New Title, I couldn’t resist pulling out the stops and recommending several scary titles perfect for a dark, chilling autumn night.

According to Kirkus Review, this is “just the bucket of blood for die-hard Rice fans.” 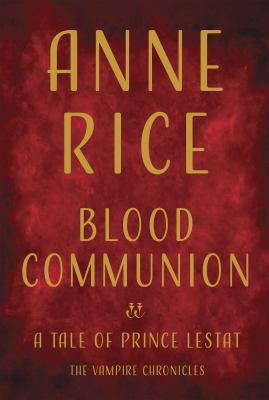 Publisher’s Summary: The Vampire Chronicles continue with a riveting, rich saga–part adventure, part suspense–of Prince Lestat and the story of the Blood Communion as he tells the tale of his coming to rule the vampire world and the eternal struggle to find belonging, a place in the universe for the undead, and how, against his will, he must battle the menacing, seemingly unstoppable force determined to thwart his vision and destroy the entire vampire netherworld.

In this spellbinding novel, Lestat, rebel outlaw, addresses the tribe of vampires, directly, intimately, passionately, and tells the mesmerizing story of the formation of the Blood Communion and how he became Prince of the vampire world, the true ruler of this vast realm, and how his vision for all the Children of the Universe to thrive as one, came to be.

The tale spills from Lestat’s heart, as he speaks first of his new existence as reigning monarch–and then of his fierce battle of wits and words with the mysterious Rhoshamandes, proud Child of the Millennia, reviled outcast for his senseless slaughter of the legendary ancient vampire Maharet, avowed enemy of Queen Akasha; Rhoshamandes, a demon spirit who refuses to live in harmony at the Court of Prince Lestat and threatens all that Lestat has dreamt of.

The Cabin at the End of the World by Paul Tremblay

In his book review for NPR, Jason Sheehan warns, “Read Paul Tremblay’s new novel, The Cabin at the End of the World, and you might not sleep for a week. Longer. It will shape your nightmares for months – that’s pretty much guaranteed. That’s what it’s built for. And there’s a very, very good chance you’ll never get it out of your head again.”

Publisher’s Summary: Seven-year-old Wen and her parents, Eric and Andrew, are vacationing at a remote cabin on a quiet New Hampshire lake. Their closest neighbors are more than two miles in either direction along a rutted dirt road.

One afternoon, as Wen catches grasshoppers in the front yard, a stranger unexpectedly appears in the driveway. Leonard is the largest man Wen has ever seen but he is young, friendly, and he wins her over almost instantly. Leonard and Wen talk and play until Leonard abruptly apologizes and tells Wen, “None of what’s going to happen is your fault”. Three more strangers then arrive at the cabin carrying unidentifiable, menacing objects. As Wen sprints inside to warn her parents, Leonard calls out: “Your dads won’t want to let us in, Wen. But they have to. We need your help to save the world.”

Thus begins an unbearably tense, gripping tale of paranoia, sacrifice, apocalypse, and survival that escalates to a shattering conclusion, one in which the fate of a loving family and quite possibly all of humanity are entwined.

M. John Harrison said in his review for The Guardian,  Devil’s Day is a “story with pull.  Its lively, building sense of evil is thoroughly entangled with the assumptions of the way of life depicted, that apparently timeless relationship of the smallholder and the moor.”

John Pentecost returns home to his family farm each autumn to help gather the sheep from the moors. However, this year his grandfather, the Gaffer, has died, and with his death the village has lost its protection from the devil.

After the blizzard of a century ago, it was weeks before anyone got in or out. By that time, what had happened there, what the Devil had done, was already fable.

Devil’s Day is a day for children now, of course. A tradition it’s easy to mock, from the outside. But it’s important to remember why we do what we do. It’s important to know what our grandfathers have passed down to us.

Because it’s hard to understand, if you’re not from the valley, how this place is in your blood.

That’s why I came back, with Kat; it wasn’t just because the Gaffer was dead.

Though that year we may have let the Devil in after all . . .

Binge Box: Ghosts and Demons – A collection of 8 ghost and demon films all gathered into one “binge box” for a spectacular movie night.

The Fog: An unearthly fog rolls into a small coastal town exactly 100 years after a ship mysteriously sank in its waters.

Killjoy: When an outcast is bullied to death, a killer clown exacts revenge in his honor. His name is Killjoy and he thinks murder is a laughing matter.

Killjoy 2: On a wilderness rehabilitation trip, a group of at-risk youth find themselves in the home of a voodoo woman where Killjoy’s spirit is summoned.

Killjoy 3: A group of unsuspecting college students accidentally open the portal to Killjoy’s demon realm and get trapped in a strange funhouse with the killer clown and his friends.

The Others: A woman who lives in a darkened house with her two photosensitive children becomes convinced that her family home is haunted.

Paranormal Activity: After moving into a suburban home, a couple becomes increasingly disturbed by a nightly demonic presence.

Paranormal Activity 2: After experiencing what they think are a series of break-ins, a family sets up security cameras around their home, only to realize that the events unfolding before them are more sinister than they seem.

The Woman in Black 2: 40 years after the first haunting at Eel Marsh House, a group of children evacuated from WWII London arrives, awakening the house’s darkest inhabitant.