This week’s New Title Tuesday recommendation, The Woman in the Window by A.J. Finn, is a compelling read that kept me guessing until the end.  Its buzz is so strong that the movie rights were bought before the book was published.  This attention is deserved.

Then the Russells move into the house across the way: a father, a mother, their teenage son. The perfect family. But when Anna, gazing out her window one night, sees something she shouldn’t, her world begins to crumble—and its shocking secrets are laid bare.

What is real? What is imagined? Who is in danger? Who is in control? In this diabolically gripping thriller, no one—and nothing—is what it seems.

Twisty and powerful, ingenious and moving, The Woman in the Window is a smart, sophisticated novel of psychological suspense that recalls the best of Hitchcock.

The Woman in the Window follows the trend of unreliable narrators such as in The Girl on the Train by Paula Hawkins and Ruth Ware’s The Woman in Cabin 10.  Anna Fox doesn’t just abuse alcohol, it is difficult to imagine someone could actually survive abusing the amount of prescription drugs she consumes. “On my own coffee table stand the remnants of my dinner: two drained-hollow bottles of Merlot and four canisters of pills….. Did I take the right quantity this morning?  Did I take the right pills?”

Yeah, Anna is messed up.  And part of the mystery is learning why.  It is not possible to discuss too much of the plot without spoiling things for readers.  But there are plenty of clues from the Hitchcock franchise.  Many of his movies are referenced; one of which, Rear Window, provides the basic premise of The Woman in the Window..  Each of the films that Anna watches, are classic and inform the story as well as provide a to-be-watched list.

This is not surprising considering that the author of The Woman in the Window has a history of both depression and a penchant for classic films. He published the book under a pseudonym,  Daniel Mallory. Although he is an executive editor at William Morrow, the publishing company, the book stands on its own merits.  That is no doubt due to Mallory’s personal experience with the subject matter.

As he told Lynn Neary in an NPR interview, “For days and weeks and even months at a stretch during the 15 years in which I struggled with misdiagnosed bipolar disorder, there were times when I couldn’t pry myself from bed, let alone leave the house.” During that time, he watched a lot of old movies such as Gaslight and Dark Passage.

You owe it to yourself to watch some of these great films.

In the meantime, The Woman in the Window is an intriguing read that will keep you turning pages until the very end.

The Breakdown by B. A. Paris – Cass is having a hard time since the night she saw the car in the woods, with the woman sitting inside―the woman who was killed. Since then, she’s been forgetting every little thing. The only thing she can’t forget is that woman, and the terrible nagging guilt. Or the silent calls she’s receiving, or the feeling that someone’s watching her. 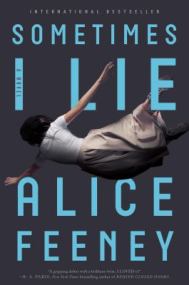 Sometimes I Lie by Alice Feeney – Amber wakes up in a hospital. She can’t move. She can’t speak. She can’t open her eyes. Though she can hear everyone around her, no one knows because she’s in a coma. But she doesn’t remember what happened. And she has a sneaking suspicion her husband had something to do with it. Alternating between her paralyzed present, the week before her accident, and a series of childhood diaries from twenty years ago, the narratives build and collide for an ending that leaves readers speechless. This novel delves into the blurred gap between who we are and who we’d like to be.