Vampires in the Lemon Grove by Karen Russell, A Reader’s Advisory

For this week’s review, I present Vampires in the Lemon Grove by Karen Russell another wonderful collection of short stories that is perfect if you enjoy magical realism. Step into Russell’s magical world where Vampires roam, women spin silk from their bodies, and seagulls become vessels for the wisdom of the universe. 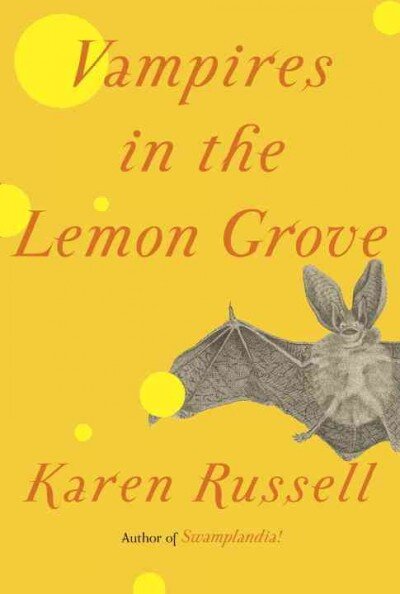 From the author of the New York Times best seller Swamplandia!–a finalist for the Pulitzer Prize–a magical new collection of stories that showcases Karen Russell’s gifts at their inimitable best.

A dejected teenager discovers that the universe is communicating with him through talismanic objects left behind in a seagull’s nest. A community of girls held captive in a silk factory slowly transmute into human silkworms, spinning delicate threads from their own bellies, and escape by seizing the means of production for their own revolutionary ends. A Massage therapist discovers she has the power to heal by manipulating the tattoos on a war veteran’s lower torso. When a group of boys stumble upon a mutilated scarecrow bearing an uncanny resemblance to the missing classmate they used to torment, an ordinary tale of high school bullying becomes a sinister fantasy of guilt and atonement. In a family’s disastrous quest for land in the American West, the monster is the human hunger for acquisition, and the victim is all we hold dear. And the collection’s marvelous title story–an unforgettable parable of addiction and appetite, mortal terror and mortal love–two vampires in the sun=drenched lemon grove try helplessly to slake their thirst for blood.

Karen Russell is one of today’s most celebrated and vital writers–honored in The New York Times list of the twenty best writers under the age of forty, Granta’s Best of Young American Novelists, and the National Book Foundation’s Five best writers under the age of thirty-five. Her wondrous new work displays a young writer of superlative originality and invention coming into the full range and scale of her powers.

Seriously, if your life is in need of the extraordinary and bizarre or you just need a hint of magic in your life, check out Vampires in the Lemon Grove. Russell’s imagination sculpts time, place, and characters, creating tiny worlds within her stories that feel not just full of life, but really feel like people are living within her stories.

One way Vampires in the Lemon Grove intrigues me is the way Russell creates worlds where these magical happenings would be as rare as if they happened in the world we live in. This is more delightful than if the entire world was magical because these small changes construct hope for the potential of the strange and bizarre in our own lives.

Swamplandia!, a gator wrestling theme park used to be the best in the region, but new competition has arrived and our protagonist, Ava Bigtree’s mother has just died while she suspects her sister is dating a ghost. When their father goes missing, they must figure out how to manage ninety eight alligators.

This is Russell’s debut collection, ten stories featuring girls being re-educated by nuns, kids making a midnight trip to search for their sister who sailed away in the exoskeleton of a giant crab, and our first story featuring Ava, a twelve-year-old alligator wrestler.