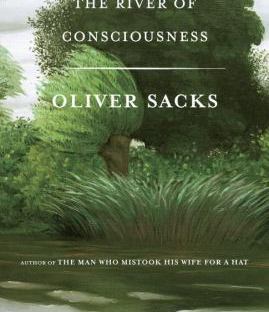 The New Title Tuesday pick for this holiday week is The River of Consciousness by Oliver Sacks – a familiar author of The Man Who Mistook his Wife for a Hat and Awakenings. 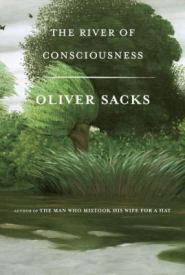 Publisher’s Summary:  A collection of essays that displays Oliver Sacks’s passionate engagement with the most compelling and seminal ideas of human endeavor: evolution, creativity, memory, time, consciousness, and experience.

Oliver Sacks is beloved by readers, as a scientist and a storyteller, for the extraordinary neurological case histories (The Man Who Mistook his Wife for a Hat, Awakenings , An Anthropologist on Mars) in which he introduced and explored many now familiar disorders–autism, Tourette’s syndrome, face blindness, savant syndrome. He was also a memoirist who wrote with searing honesty and humor about the remarkable and strange encounters and experiences that shaped him (Uncle Tungsten, On the Move, Gratitude).

Sacks, an Oxford-educated polymath, had a deep familiarity not only with literature and medicine but with botany, animal anatomy, chemistry, the history of science, philosophy, literature, and psychology. The River of Consciousness is one of two books Sacks was working on up to his death, and it reveals his ability to make unexpected connections, his sheer joy in knowledge, and his unceasing, timeless project to understand what makes us human.

Oliver Sacks was not only a prolific author but an extraordinarily talented writer who can made complicated neurological conditions understandable. His writings were humorous, informed by both science and humanity.  As Nicole Krauss explained in her New York Times review:

As a neurologist, Sacks deepened our understanding of the dynamic, creative abilities of the brain by uncovering, again and again, the unusual ways the impaired brain may deal with its handicaps, compensating in ingenious ways, or by creating plausible explanations for the nonsensical, thus preserving a form of coherence, however subjective. Taken together, his case studies illustrated how just as homeostasis, the maintenance of constant internal environment, is crucial to all organisms, so is a stable, cogent narrative of reality crucial to the mind and its construction of the self, such that even severely disordered brains will find ways of creating order.

The ten essays in The River of Consciousness range from a discussion of Darwin to the fallibility of memory.  As Krauss wrote, Sacks was gifted with the ability to observe and explain the “evolution of life and the evolution of ideas, on the workings of memory, the process of consciousness, and the nature of creativity, alongside examinations of his own mishearings and misrememberings and his experience of illness.”

In this season of reflection and reconstruction, it is a gift to have the insights and wisdom of such a perceptive scientist and writer so easily within reach. 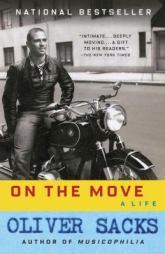 On the Move: a Life – Physician and writer Oliver Sacks recounts his experiences as a young neurologist; his physical passions–weight lifting and swimming; his love affairs, both romantic and intellectual; his guilt over leaving his family to come to America; his bond with his schizophrenic brother; and the writers and scientists–Thom Gunn, A. R. Luria, W. H. Auden, Gerald M. Edelman, Francis Crick–who influenced him. 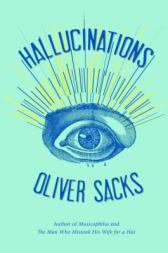 Hallucinations – This book is an investigation into the types, physiological sources, and cultural resonances of hallucinations traces everything from the disorientations of sleep and intoxication to the manifestations of injury and illness. Have you ever seen something that was not really there? Heard someone call your name in an empty house? Sensed someone following you and turned around to find nothing? Hallucinations don’t belong wholly to the insane. Much more commonly, they are linked to sensory deprivation, intoxication, illness, or injury. People with migraines may see shimmering arcs of light or tiny, Lilliputian figures of animals and people. People with failing eyesight, paradoxically, may become immersed in a hallucinatory visual world. Hallucinations can be brought on by a simple fever or even the act of waking or falling asleep, when people have visions ranging from luminous blobs of color to beautifully detailed faces or terrifying ogres. Those who are bereaved may receive comforting “visits” from the departed. In some conditions, hallucinations can lead to religious epiphanies or even the feeling of leaving one’s own body. Humans have always sought such life-changing visions, and for thousands of years have used hallucinogenic compounds to achieve them.

The Mind’s Eye – Includes stories of people who are able to navigate the world and communicate with others despite losing what many of us consider indispensable senses and faculties: the power of speech, the capacity to recognize faces, the sense of three-dimensional space, the ability to read, and the sense of sight. This book is a testament to the complexity of vision and the brain and to the power of creativity and adaptation, and it provides a whole new perspective on the power of language and communication, as we try to imagine what it is to perceive through another person’s eyes, or another person’s mind.

Musicophilia: Tales of Music and the Brain –  In Musicophilia, he examines the powers of music through the individual experiences of patients, musicians, and everyday people–from a man who is struck by lightning and suddenly inspired to become a pianist at the age of forty-two, to an entire group of children with Williams syndrome who are hypermusical from birth; from people with “amusia,” to whom a symphony sounds like the clattering of pot  and pans, to a man whose memory spans only seven seconds–for everything but music.

Our exquisite sensitivity to music can sometimes go wrong: Sacks explores how catchy tunes can subject us to hours of mental replay, and how a surprising number of people acquire nonstop musical hallucinations that assault them night and day. Yet far more frequently, music goes right: Sacks describes how music can animate people with Parkinson’s disease who cannot otherwise move, give words to stroke patients who cannot otherwise speak, and calm and organize people whose memories are ravaged by Alzheimer’s or amnesia.  Music is irresistible, haunting, and unforgettable, and in Musicophilia, Oliver Sacks tells us why. 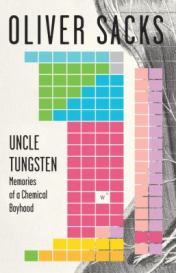 Uncle Tungsten: Memories of a Chemical Boyhood – Long before Oliver Sacks became a distinguished neurologist and bestselling writer, he was a small English boy fascinated by metals-also by chemical reactions (the louder and smellier the better), photography, squids and cuttlefish, H.G. Wells, and the periodic table. In this memoir, the author chronicles his love affair with science and the magnificently odd and sometimes harrowing childhood in which that love affair unfolded. 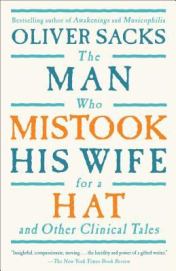 The Man Who Mistook His Wife for a Hat and Other Clinical Tales – In his most extraordinary book, “one of the great clinical writers of the 20th century” (The New York Times) recounts the case histories of patients lost in the bizarre, apparently inescapable world of neurological disorders. Oliver Sacks’s The Man Who Mistook His Wife for a Hat tells the stories of individuals afflicted with fantastic perceptual and intellectual aberrations: patients who have lost their memories and with them the greater part of their pasts; who are no longer able to recognize people and common objects; who are stricken with violent tics and grimaces or who shout involuntary obscenities; whose limbs have become alien; who have been dismissed as retarded yet are gifted with uncanny artistic or mathematical talents. If inconceivably strange, these brilliant tales remain, in Dr. Sacks’s splendid and sympathetic telling, deeply human. They are studies of life struggling against incredible adversity, and they enable us to enter the world of the neurologically impaired, to imagine with our hearts what it must be to live and feel as they do. A great healer, Sacks never loses sight of medicine’s ultimate responsibility: “the suffering, afflicted, fighting human subject.” 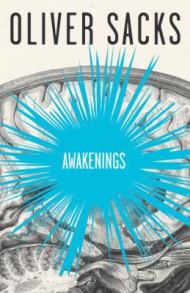 Awakenings non-fiction – is the remarkable account of a group of patients who contracted sleeping-sickness during the great epidemic just after World War I. Frozen in a decades-long sleep, these men and women were given up as hopeless until 1969, when Dr. Sacks gave them the then-new drug L-DOPA, which had an astonishing, explosive, “awakening” effect. Dr. Sacks recounts the moving case histories of these individuals, the stories of their lives, and the extraordinary transformations they underwent with treatment. This book, which W. H. Auden called “a masterpiece,” is a passionate exploration of the most general questions of health, disease, suffering, care, and the human condition.

The revised 1990 edition includes new essays on the making of several dramatic adaptations of Awakenings, including Harold Pinter’s play, A Kind of Alaska, and the feature film, Awakenings, starring Robert De Niro and Robin Williams. 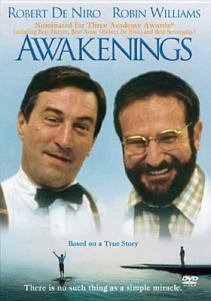