This week the ever-busy Youth Services Manager, Teri Rankin, provides some great titles to start off the school year as well as announcing upcoming events.  Thanks to the O’Fallon Weekly for sharing Library news and events with their readers.

Join us this weekend for International Dot Day, Sunday, September  17 at 2 PM. Teri wrote that too often “kids get the idea that only certain kids can draw of paint.”  She said Dot Day was “started to help children realize everyone is creative – it only takes a dot on a page to get an idea started.”  There will be art projects, a giant dot-to-dot game, face painting and more.  This is perfect for 4-year olds and up. Please register online or at the library.

Be sure and enter to win a brand-new canvas book bag full of Children’s book publisher, Sourcebooks/Jabberwocky has provided a cool tote bag full of advanced reading copies of titles including Rocket Science for Babies, Goodnight Lab, The Messy Alphabet Book, The List, Shadow Weaver, and MORE!  The lucky winner will be drawn October 1. 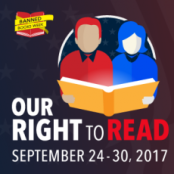 public school or library shelves – titles that include Where’s Waldo? and Shel Silverstein’s A Light in the Attic.  The American Library Association lists all the titles during Banned Book Week, Sept 24-30.  Adult Services will begin the celebration Monday, September 18 – October 1 with a display of eight Mason jars filled with the shredded pages of previously banned books.  Participants may guess the titles or any/all books.  Winners will be selected from correct entries and notified during the first week of October.

Amanda Panda Quits Kindergarten by Candice Ransom – When Amanda Panda’s first day of kindergarten does not go according to plan, she decides to quit and join her older brother in the second grade

Armstrong and Charlie by Steven B. Frank – During the pilot year of a Los Angeles school system integration program, two sixth grade boys, one black, one white, become best friends as they learn to cope with everything from first crushes and playground politics to the loss of loved ones and racial prejudice in the 1970s.

I’m Smart by Kate McMullen – Depicts a super-smart school bus that uses its savvy to navigate the roads in super-safe ways while transporting kids to and from school.

Lights, Camera, Middle School! by  Jennifer L Holm – Babymouse joins the school Film Club and writes the greatest cinematic masterpiece of all time! But when the movie gets shown to the entire school, will it be a box office hit or a flop?

Priscilla Gorilla by Barbara Bottner – Priscilla is obsessed with gorillas. But when her ape-like behavior gets her sent to the Thinking Corner, Priscilla wonders if she is really channeling her inner gorilla, or just being a troublemaker.

Second Grade Holdout – by Audrey Vernick – Missing the familiarity of first grade and imagining the impossible tasks assigned by his next teacher, a boy refuses to start second grade.