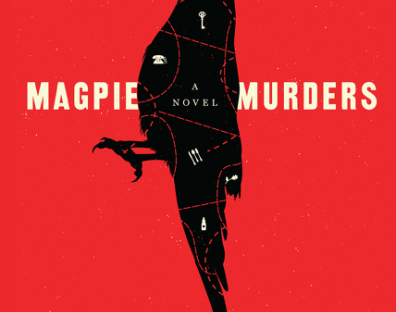 This week’s New Title Tuesday pick, Magpie Murders by Anthony Horowitz, is a two-for-the-price-of-one mysteries – a manuscript that is an Agatha Christie style cozy as well as a mystery encountered by the editor of the manuscript. 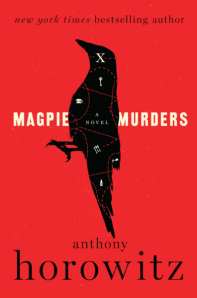 Publisher’s Summary: When editor Susan Ryeland is given the tattered manuscript of Alan Conway’s latest novel, she has little idea it will change her life. She’s worked with the revered crime writer for years and his detective, Atticus Pund, is renowned for solving crimes in the sleepy English villages of the 1950s. As Susan knows only too well, vintage crime sells handsomely. It’s just a shame that it means dealing with an author like Alan Conway…

But Conway’s latest tale of murder at Pye Hall is not quite what it seems. Yes, there are dead bodies and a host of intriguing suspects, but hidden in the pages of the manuscript there lies another story: a tale written between the very words on the page, telling of real-life jealousy, greed, ruthless ambition and murder.

As a fan of British cozies and audiobooks, I enjoyed listening to Magpie Murders and was immediately caught up in the opening when Susan Ryeland warns readers that after reading the manuscript, her life was changed – but not for the better.  She says, “I no longer live in Crouch End. I no longer have my job.  I’ve managed to lose a great many friends.”  She continues to admit that she never liked the author although she loves a good whodunit and the reveal of the solution in the end.  “But,” she said, “Magpie Murders wasn’t like that.  It wasn’t like that at all.” Again, warning readers off the book.

With Horowitz’s credentials, it’s not surprising he’s created this book within a book puzzle to solve.  He’s not only the author of the best-selling Alex Rider Series, he has also written Sherlock Holmes novels sanctioned by the Conan Doyle estate, and the creator of the BBC series Midsomer Murders and Foyle’s War.

But it is his history with reading all of Agatha Christie’s novels as well as adapting many of the Poirot mysteries for television that fuel his creativity in Magpie Murders.  He told NPR’s Lynn Neary that he’s had the idea for  Magpie Murders for twenty years but it took that long to actually start writing it.

“I wanted it to be more than just a murder mystery story,” he says. “I wanted it to be … a sort of a treatise on the whole genre of murder mystery writing. How the writers come up with the ideas; how these books are formed. That was my interest in writing it. I didn’t just want people to have the fun and the pleasure of ‘Oh, it was the doctor’ … on the final page. I wanted there to be something a little bit more.”

It was definitely worth the effort.  You won’t be disappointed with Magpie Murders.

The House of Silk – It is 1890. A year after Holmes’s death, Watson–now in a retirement home–narrates a tale of Sherlockian detection that could tear apart the very fabric of society. The story opens with a train robbery in Boston, and moves to the innocuous setting of Wimbledon.

Stormbreaker – the first in the Alex Rider soon to be 11-book series for Young Adults. They told him his uncle died in an accident. He wasn’t wearing his seatbelt, they said. But when fourteen-year-old Alex finds his uncle’s windshield riddled with bullet holes, he knows it was no accident. What he doesn’t know yet is that his uncle was killed while on a top-secret mission. But he is about to, and once he does, there is no turning back. Finding himself in the middle of terrorists, Alex must outsmart the people who want him dead. The government has given him the technology, but only he can provide the courage. Should he fail, every child in England will be murdered in cold blood.