The New Title Tuesday selection, Ray & Joan: The Man Who Made the McDonald’s Fortune and the Woman Who Gave it All Away, by Lisa Napoli is a delicious peek at the history of the American dreamer and a young supper-club singer who made her own lasting imprint on the country. 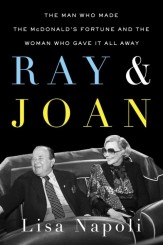 passion: a struggling Mad Men–era salesman with a vision for a fast-food franchise that would become one of the world’s most enduring brands, and a beautiful woman willing to risk her marriage and her reputation to promote controversial causes that touched her deeply.

Ray Kroc was peddling franchises around the country for a fledgling hamburger stand in the 1950s—McDonald’s, it was called—when he entered a St. Paul supper club and encountered a beautiful young piano player who would change his life forever. The attraction between Ray and Joan was instantaneous and instantly problematic. Yet even the fact that both were married to other people couldn’t derail their roller coaster of a romance.

To the outside world, Ray and Joan were happy, enormously rich, and giving. But privately, Joan was growing troubled over Ray’s temper and dark secret, something she was reluctant to publicly reveal. Those close to them compared their relationship to that of Elizabeth Taylor and Richard Burton. And yet, this volatility paved the way for Joan’s transformation into one of the greatest philanthropists of our time. A force in the peace movement, she produced activist films, books, and music and ultimately gave away billions of dollars, including landmark gifts to the Salvation Army and NPR.

Together, the two stories form a compelling portrait of the twentieth century: a story of big business, big love, and big giving.

I admit I relished reading about the tattle-tale details of their stormy romance and their dynamic and opposite personalities.  He was an authoritarian alcoholic businessman and she never forgot her humble start.Joan had a habit of taking in stray dogs and spending Ray’s money on philanthropic causes that he wouldn’t have.

I admit that draws me to this story plus the way a mid-western club-singer retained her individuality at a time when women were expected to be merely accessories to their dominant husbands.  In addition, rather than parking all that wealth in the Kroc dynasty coffers, Joan not only lived a lavish lifestyle but became a generous philanthropist to a wide variety of causes from alcoholism education, peace activism.

Keith Herrell wrote in his BookPage review: “Part corporate success story, part soap opera, this tale has a lot of territory to cover, and Napoli recounts it all in a breezy, amusing style. She’s at her best on the subject of Ray and Joan’s complicated relationship, but the backstories—Ray’s rise from milkshake machine salesman to titan of commerce and Joan’s journey from a difficult childhood to beloved philanthropist—are just as riveting.”

Before the Ray Kroc biopic, The Founder, starring Michael Keaton, opens in theaters in January, read about Napoli’s well-researched biography of the couple,  Ray & Joan.

Radio Shangri-la  is about the impact of media culture on the mysterious Kingdom of Bhutan, where she was invited to help start a radio station at the dawn of democratic rule.