Who
This is a free event and open to the general public. Please REGISTER soon as space is limited. 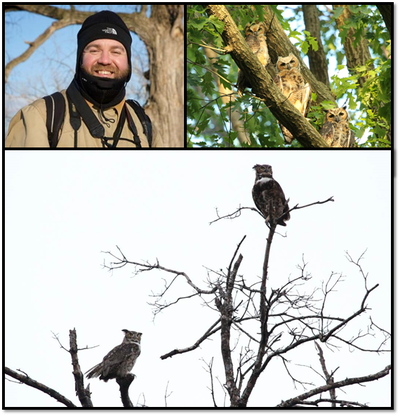 Mark H.X. Glenshaw, an award-winning naturalist, returns to the O’Fallon Public Library. Mark has been observing, documenting, and doing outreach with Great Horned Owls in Forest Park since December 2005. Mark has learned many of the owls’ hunting perches and observed and documented many predatory attempts as well as seen the owls feed themselves and their many owlets. His talk will feature photos and videos of these hunting and feeding behaviors. Please join us for a fascinating insight into one of the most successful predators in the Americas.

He leads dozens of owl prowls each year in Forest Park. He also gives scores of talks each year across Missouri and Illinois to different groups ranging from natural history/conservation organizations, to schools, to public libraries. He was awarded the Citizen Scientist Award for the 2006 St. Louis Bioblitz by the Academy of Science-St. Louis. Mark is a certified Missouri Master Naturalist and a volunteer for Forest Park Forever. A native of Washington, D.C. and a dual citizen of the United States and South Africa, Mark has his bachelor’s degree in history with a minor in communications and journalism from Washington University in St Louis.

Refreshments will be provided.