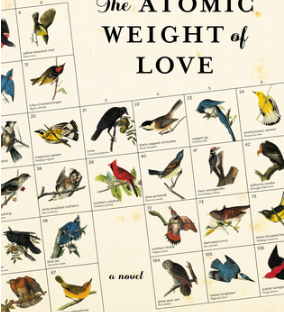 Meridian falls in love with Alden.  Quickly.  Who wouldn’t love someone passionate about learning how the world works, who can explain the flight of a bird or the cells that make up a flower?  Its 1941 at the University of Chicago, and while love is in the air, war isn’t far behind.

The Atomic Weight of Love covers World War II through the lens of Meridian’s experiences, but really the story isn’t her own–it’s a representation of what it was like to be a young woman in love in the 1940’s.  Though academically ambitious herself, her dreams must be left off to the side so Alden can work on a secret government project–of course, the atomic bomb.

The author, Elizabeth J. Church, sprinkles in facts about physics, ornithology, and other scientific findings of the time throughout the book.  As is clear from the title, the novel explores the connection and nuances between the explainable world and the intangible.  The secrets of the universe may seem clear but the inner struggles, decidedly, are not.

Spanning from 1932-2011, The Atomic Weight of Love will make you glimpse into the past to see how it has affected our future.  It’s a great choice for anyone who likes romance, historical fiction, or scientific works.